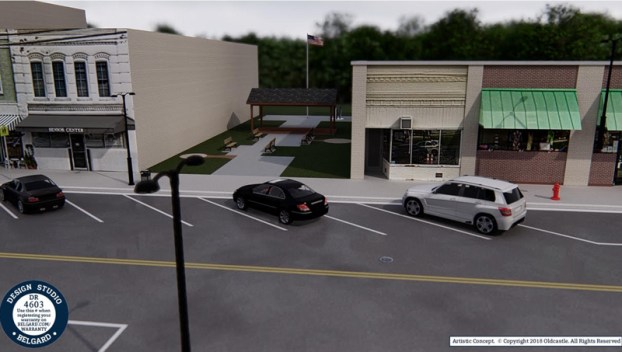 IN THE WORKS: A group of military moms in Belhaven is raising funds to help reinvigorate the town’s Veterans Park. This rendering, provided by Slade Landscaping, shows the vision for the project. (Slade Landscaping)

BELHAVEN — A group of military moms in Belhaven is working to breathe new life into town’s veterans park, creating a space for local residents to reflect on the sacrifices of America’s military personnel.

“The park in Belhaven has been adopted by different people and people have done work to it,” explained Olivia Hudnell. “Being it was a volunteer effort, it kind of slacked off and it looked bad, and I thought our group needed to be active in something, so we decided we would take it on.”

Working with Slade Landscaping in Bath, the group has a plan in place for the park, which is located on Main Street in downtown Belhaven. Designing the renovations, Hudnell says the group wanted the park to be low-maintenance and able to withstand flooding and hurricanes

“We plan to have a shelter built, and under that we plan to have brick pavers that people can have in honor or memory of a veteran,” Hudnell said. “We want it to be somewhere were people can sit, eat, relax and just remember the veterans.”

To raise money for the project, which weighs in at approximately to $21,000, the group is selling engraved bricks to go in the park that will honor individual veterans and active-duty service members. A 4-by-8-inch brick costs $75, while an 8-by-8-inch brick is $125. Donations for the project can be made through the Belhaven-Pantego Rotary Club, which is handling the financial aspect of the project.

“It’s about knowing that the community cares,” Hudell said. “For us, it’s a way to honor our children that are serving and to honor the ones who have and say, ‘Thank you.’”

Forms to purchase a brick are available via the “Veterans Park – Belhaven, NC” Facebook page and here. Donations can be sent to Belhaven-Pantego Rotary Club, 770 W. Main St., Belhaven. For more information and ways to help with the project, call Hudnell at 252-943-7829.

Washington Mayor Mac Hodges has been hospitalized due to COVID-19, according to his daughter, and Washington City Councilwoman Virginia Finnerty... read more