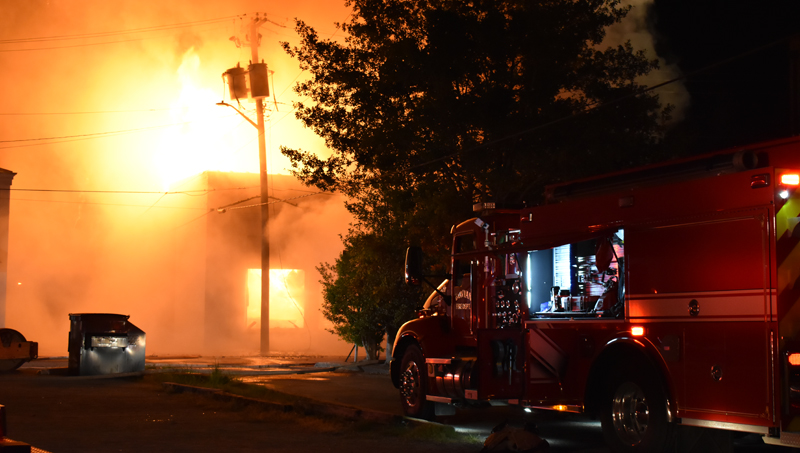 ROOF COLLAPSE: Flames erupt from the building that formerly housed Ingalls Printing after the roof partially collapsed. The building was most recently occupied by Bear Creek Woodworks, and a fundraiser has been established to help the owners. (Matt Debnam/Daily News)

Officials are investigating the cause of a structure fire that destroyed a business in downtown Washington early Wednesday morning. The building, located at 115 N. Respess St., housed Ingalls Printing for years and was most recently occupied by Bear Creek Woodworks.

According to Washington Fire-Rescue-EMS Chief Mark Yates, the fire was reported at 12:22 Wednesday morning after someone in the neighborhood saw flames coming from the building. A Washington police officer was on scene in two minutes and the first fire truck arrived three minutes after the call first came in.

From there, Chocowinity, Old Ford and Bunyan volunteer fire departments, as well as Williamston Fire-Rescue-EMS, joined in fighting the fire. Chocowinity EMS, the Washington Police Department, the Beaufort County Sheriff’s Office, Washington Electric Utilities and Beaufort County Emergency Services were on scene providing support. The roof of the structure collapsed during the response, adding fuel to the fire.

“I’m just so glad this didn’t happen during the day yesterday,” Yates said Wednesday morning. “We had a lot of folks here, thank goodness, but even last night it was a struggle to keep people hydrated and keep moving people in and out. It was hot, but it wasn’t hot like it is today or like it was yesterday.” 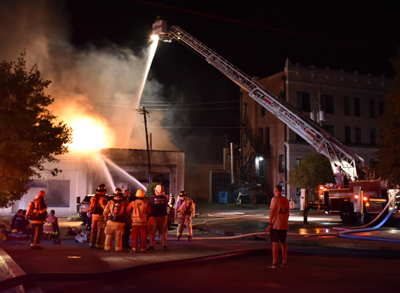 FIREFIGHTING: A Washington Fire-Rescue-EMS ladder truck doused flames with water as firefighters hose down the building from below. (Matt Debnam/Daily News)

The fire also knocked out power for much of the downtown area for more than an hour early Wednesday morning. Yates said a transmission line running in front of the business serves as a main feed for the downtown area.

While most firefighters left the scene around 4:30 a.m. Washington firefighters and Washington Electric were back on scene at 8:30 a.m. After assessing the power situation, Yates said fire investigators planned to go into the building around 11:30 a.m. to try and determine the cause of the fire.

“We had a lot of help, and I really appreciated all the help we got,” Yates said. “It went just about as good as it could go last night, and it was because we had so much help.”

As for Bear Creek Woodworks, business co-owners Lee Galt and Bahnson Gray say that they plan to press on with their business. Gray said that the business will be looking for a place to lease during the interim. The two were at the scene Wednesday as fire officials performed their investigation.

“We’ve been in business for about a year and this is a setback,” Gray said. “But we’re not going to stop doing what we love. We’ve just got to figure out where and how we’re going to do it.”