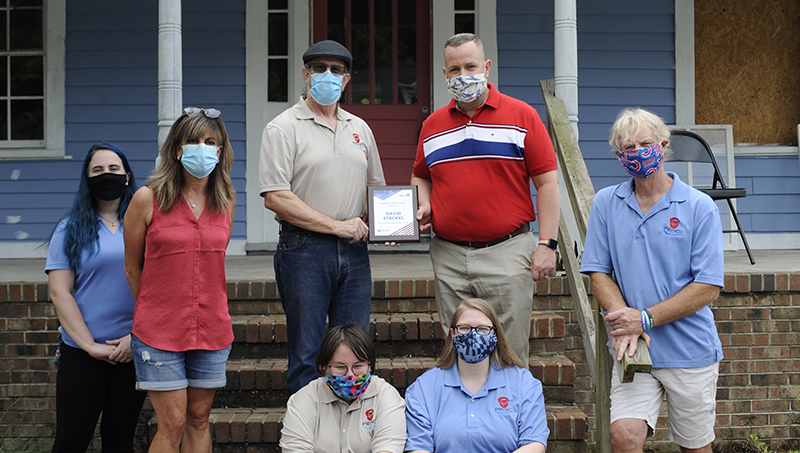 Since 2014, ALCOVA Mortgage has celebrated the hometown heroes among us. This year, one of the company’s Hometown Heroes awards came to a veteran helping his community in Washington.

On Friday, board members of the Pamlico Rose Institute for Sustainable Communities gathered in the front garden of the nonprofit’s inaugural project, Rose Haven, as ALCOVA Mortgage’s Michael Farmer handed David Steckel a Hometown Hero plaque and a check for $500.

Steckel is Pamlico Rose’s project engineer, charged with rehabbing Rose Haven, the early 20th-century home on Washington’s East Third Street, that will be future rehabilitation home for female veterans. Before he became a self-taught rehab specialist of historic homes, Steckel had a long career in the military that started when he graduated from high school in 1975 and joined the U.S. Army and ended on retirement in 2017, after a 30-year career with U.S. Air Force. In between, were an eight-year stint working on civilian aircraft, a bachelor’s degree in aerospace engineering; recruitment by the Air Force; a master’s degree in engineering; working as a reliability engineer for the Stealth Bomber and in the environmental field, with focus on base cleanup and test-range operations; and serving as the base master planner at Bagram Airfield in Afghanistan in 2013.

ALCOVA’s designation of Hometown Hero isn’t limited to a veteran’s service — it encompasses what that veteran has done since leaving service.

“Veterans are recognized not only for their service to our country, but also their continuing service to their communities,” according to ALCOVA.

In addition to his work with PRISC, Steckel is a volunteer with Team Rubicon, a nonprofit that deploys veterans to help in the wake of natural disasters, and serves as vice president of ME International, a nonprofit that advocates for awareness and support of those diagnosed with myalgic encephalomyelitis and those caring for them.

23rd-annual Smoke on the Water canceled