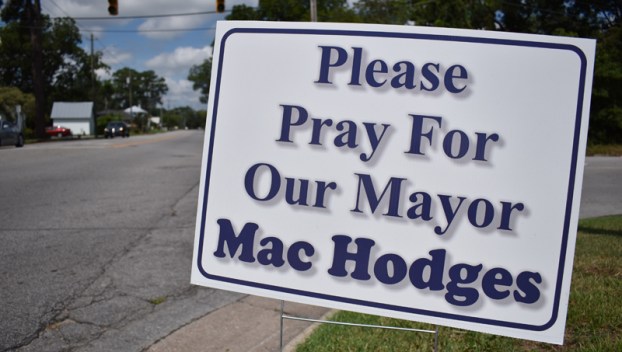 PRAYERS FOR BEAR: Throughout Washington, signs posted by an anonymous person encourage continued prayers for Washington Mayor Mac “Bear” Hodges, who was placed on a ventilator this week during treatment for COVID-19. (Matt Debnam/Daily News)

Washington Mayor Mac Hodges is resting comfortably this week after being placed on a ventilator at Vidant Medical Center in Greenville, where he is being treated for COVID-19. According to his pastor, Jay Martin, Hodges has been in good spirits, with support and prayers from the community uplifting the mayor and his family.

“My understanding is that (Hodges) went on the ventilator mid-afternoon (Wednesday),” said Martin, who has been authorized to speak on behalf of the family. “It was a family decision, and he essentially said, ‘I’m ready, it’s time.’ But he did not say so with any sense of resignation. It was like, ‘It’s time for me to rest in this manner.’”

Hodges was tested for COVID-19 on July 15, and learned of the positive results the next day. He was then hospitalized the following week.

With his friendly personality, Martin said Hodges has quickly become a favorite patient at the hospital. While the mayor is under sedation on the ventilator, Martin said he and the family have been able to maintain good spirits, despite the isolation that naturally comes with treatment for COVID-19.

“He is so outgoing, that to be isolation is a challenge,” Martin said. “It’s been hard, and there have been times when he’s been sad and lonely, but not despairing. The nursing staff at Vidant has been so on the ball and top-notch, to the point where they set up an iPad for Facetime with family. He has been able to speak to family consistently, and that has buoyed his spirits. … He’s tired, as anyone would be, and he knows he’s in for the long haul. But he’s a fighter. He loves his town, he loves his family, and his spirits are good.”

As the mayor rests and recovers in the hospital, the support and prayers of the community have been a source of comfort for him and his family. Throughout Washington, signs encouraging prayer for Hodges have popped up in prominent locations, and daily updates posted by his daughter on social media have amassed a strong following and constant comments of support.

Fellow church members at the Church of the Good Shepherd have also organized a digital tribute where community members can record video messages to be shared with the mayor. Tributes can be recorded here through Aug. 2, and will be shared with the mayor once he is alert. Participants are encouraged to tell why they love Hodges or provide words of encouragement.

“He’s in a great place, he’s got a great attitude, and the family is hopeful and thankful,” Martin said. “The family is asking for prayers, not just for Mac, but for Beaufort County, which has become more of a (COVID-19) hotspot.”

Beaufort County had a total of 339 confirmed COVID-19 cases as of Wednesday, an increase of 15 overnight. There are... read more