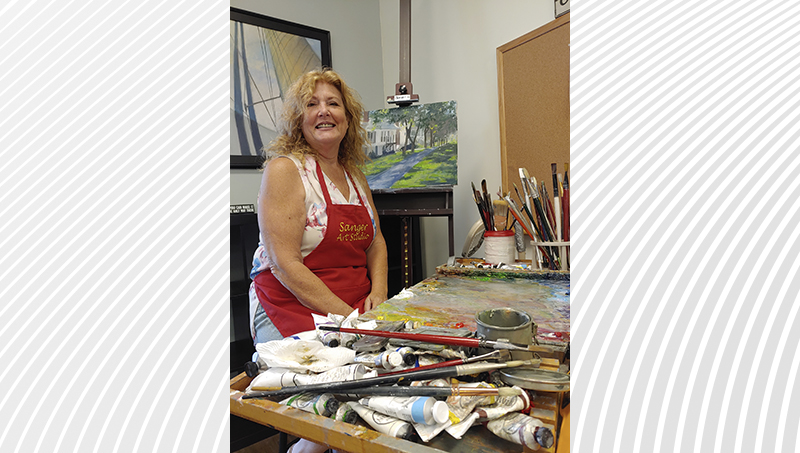 NEW IN TOWN. Eileen Sanger, owner of the Sanger Art Studio and Gallery, poses near some of her impressionist paintings, which can be found in her new location at 273 E. Water St. in Belhaven. She offers painting and drawing classes at the studio and is working on a plan to host “painting parties” for private groups. (Karen Thiel)

BELHAVEN — “I want to be able to paint until the day I die — because you never retire from art.” That is the motto, and goal, of Eileen Sanger, a landscape artist who relocated to North Carolina 18 months ago, from rural New York. She said this week that the Sanger Art Studio and Gallery, which opened in Belhaven on July 11, will hopefully help her do just that.

The business, which was originally located at the Swindell Building in Bath, is a dream come true for Sanger, a graduate of the Cape Cod School of Art in Massachusetts and the Roslyn School of Painting in Long Island, New York. She said painting has been part of her life for at least 45 years. Landscapes have been her main focus ever since the mid-1990s, when a friend encouraged her to get outside and paint, instead of staying inside the studio. She took that advice, fell in love with the park where she set up her easel, and has never stopped.

“I love plein air painting,” Sanger said, explaining that “plein air” is French for “in the open air” and is used by artists to describe the art of outdoor painting, capturing landscapes in natural light.

“I love the views! The lighting is so much better outside,” Sanger said, adding that plein air painting is great for “impressionism,” the style in which she paints, because it is all about the interplay of light.

Sanger said her recent move to eastern North Carolina has intensified her love of the impressionism because the scenery is so much better.

“Instead of potato farms and horses and vineyards, which are all wonderful, we have the coastline, scenic spots that are surrounded on three sides by water and all that reflective light,” Sanger said.

Sanger has been part of a traveling group dedicated to the plein air, a dozen artists who have traversed the eastern coast from New York state to Massachusetts and Maine for more than two decades.

“I have gone with the same 12 artists for one to two weeks every year. This is the first year in five that I have missed it,” she said of her travels to the group’s retreat at Nanatuck House in Port Clyde, Maine, as well as the Massachusetts towns of Cape Cod, Chatham and Provincetown and spots along coastal Long Island, New York.

“All those landscapes just never get old,” she said of the group’s adventures.

Sanger’s reputation as an impressionist is already known in Belhaven. Several of her works have been featured at the Belle Arts Studio, four doors down from her new location in the Water Street Villas. She said plans are in the works for the two businesses to co-host events, such as art show openings and receptions, in the near future. In the meantime, she is using her new space for more than just display purposes. Sanger said she is continuing her longstanding practice of teaching people how to draw and paint — especially those who don’t think they have any artistic talent at all.

“When first-timers walk in and see the tables, they’re excited at the idea of lessons and painting parties. I’ve had people in previous classes who didn’t think they could draw, but anybody can learn how to draw — and they do,” Sanger said.

She has already held one painting party, where participants chose from several artistic styles, all on canvas at several tables and did their best to duplicate the techniques. Also on Sanger’s list of possible offerings are “painting and sipping” parties, where guests bring their own beverages while Sanger supplies the paint, brushes, inspiring art samples, a short art history lesson and encouragement for a happy, low-key social event.

Sanger said she still can’t believe how her already-good life became even better when she visited a friend in Bath, fell in love with the area and took the chance to retire in eastern North Carolina. “This is my dream. I absolutely love it here. The people are amazing. My soul is happy here, and I just know I’m in the right place,” Sanger said.

Sanger Art Studio and Gallery is located at 273 E. Water St., Unit 206, in Belhaven. Sanger’s art can also be viewed online via Facebook at “Sanger Art Studio.” She can be reached via email at sangerartist@optonline.net or at www.eileensanger.com, and by phone at 631-838-1622.