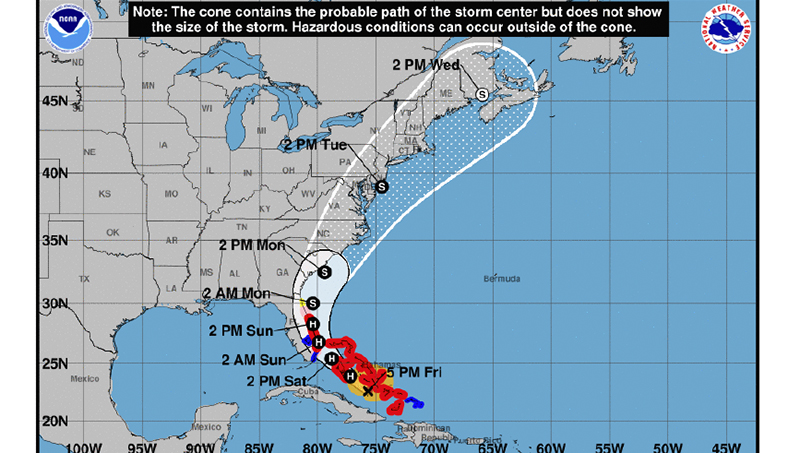 Isaias has been downgraded to a tropical storm this evening, but eastern North Carolina will still see a punch from the storm late Monday into Tuesday.

Isaias has a current intensity of 70 mph, slightly below hurricane strength.

According to Ryan Ellis, the science and operations officer at National Weather Service Newport/Morehead City, Isaias has slowed down a bit, and the most likely time of arrival is early Tuesday morning.

Impacts to Beaufort County have lessened with the latest forecast: 2 to 3 inches of rain west of Washington, and maximum sustained winds in Belhaven and Aurora in the upper-40-mph range.

“But if that track decides to go offshore, it could ramp them back up,” Ellis said.

There is less of a threat of storm surge based on how fast Isaias is moving. Where Beaufort County has a greater risk is the threat of tornadoes, as the southeastern quadrant of the hurricane will, most likely, be passing over the coastal region.

“I do not like being on the right side of that storm. The southeast quadrant is known for pop-up tornadoes,” Ellis said. “But the continuing shift west is favorable for a lot of conditions, with the exception of tornadoes.”

Isaias may regain strength overnight, but until it’s determined when the storm will impact eastern North Carolina, Beaufort County Emergency Services is holding off on opening a shelter.

“That uncertainty of the timing really drives the whole shelter piece. Right now, we’re prepared to open shelters, but no decision is being made tonight,” said Chris Newkirk, deputy director of Beaufort County Emergency Services.

To view the entire update from the National Weather Service, click HERE.