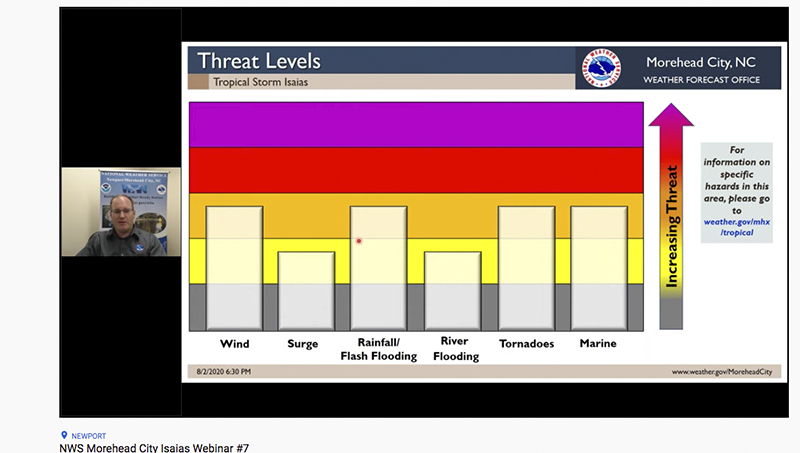 Tropical Storm Isaias has regained a bit of strength, but little has changed with the National Weather Service Newport/Morehead City forecast for eastern North Carolina.

Tropical storm force winds may be felt in Beaufort County as early as then.

According to Ryan Ellis, science and operations officer at NWS Newport/Morehead City, Isaias did downgrade temporarily but got “its act back together.”

“Confidence is high at this time for the track, timing, and intensity, but there are still those little adjustments as the storm moves up the coast that could swing things one way or the other as far as the main impacts go,” Ellis said.

Ellis said there is an increased tornado threat because Isaias is tracking west, which puts Beaufort County on the right side of the storm and more favorable for tornadoes.

Flooding rain could be a localized threat, he said.

“With the westward track that we’re seeing, the bigger threat for moderate flooding is basically going to be west of Highway 17, with localized flooding to the east of Highway 17, and this is an interesting one to watch. Depending on where the storm makes landfall, what we typically see is, as the storm is over water, the rainfall typically is on the right side of the storm, but then shifts over to the left side of the storm,” Ellis said. “So with a landfall down around Myrtle Beach or Wilmington area, we can see a lot of that rain displaced a little bit to the west. If it does wobble to the east, that could move that over, where more of that rainfall could be transitioning over to the other side or maybe still over on the right side.”

Rainfall totals are forecasted to be 1 1/2 inches to 2 inches in Belhaven and Aurora, with potentially more in the western part of the county.

There is a storm-surge watch in effect for “everything south of Duck,” Ellis said: Pamlico Sound, Albemarle Sound, Neuse River and Pamlico River can all expected to see 1 to 3 feet above normally dry areas next to rivers.

To view the PDF version of the Sunday evening update from the National Weather Service Newport/Morehead City, click HERE. To watch the update, click HERE.