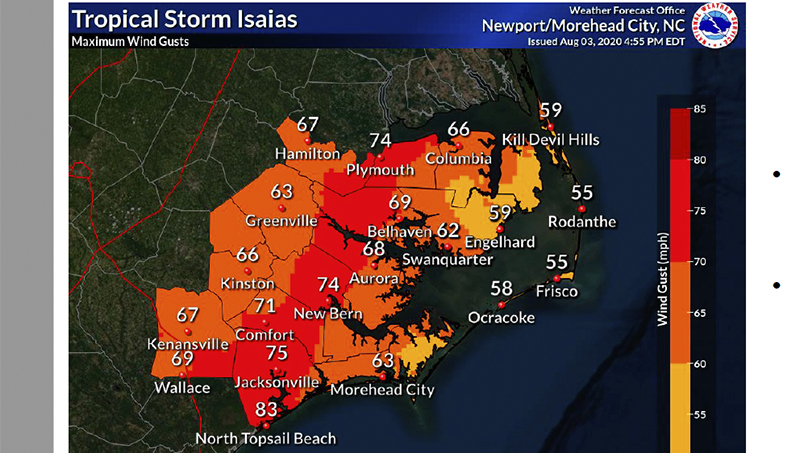 As Tropical Storm Isaias tracks into eastern North Carolina, officials are warning that this is a different type of storm than recently seen in Beaufort County.

Though expected to speed up as it makes landfall, tropical storm force winds and the potential for tornadoes are forecasted to be the biggest impacts in eastern North Carolina.

“It’s probably going to be a good wind event,” said Chris Newkirk, deputy director of Beaufort County Emergency Services. “That (Highway) 17 corridor is going to be the highway for these high winds. It’s possible that 17 could experience higher winds for longer. … We expect to have trees down, limbs down. We expect to have power outages. Now, to what scale that is, we don’t know, but we do expect power outages, and that may be widespread.”

According to the 6 p.m. update from the National Weather Service Newport/Morehead City office, maximum sustained winds in Beaufort County will be in in the low-to-mid-50-mph range, with wind gusts near 70 mph.

Tornados are expected to accompany Isaias and could well precede the peak of the storm between 1 a.m. and 4 a.m. Because the tropical storm is tracking west of eastern North Carolina, much of the coastal region is at a greater risk of tornadoes.

“We do expect tornadoes on landfall,” Newkirk said. “We do not need the citizens of Beaufort County going to bed tonight with no way to get a message about tornadoes.”

The America Red Cross tornado app and National Oceanic and Atmospheric Administration hurricane app are good sources, as is listening to NOAA radio.

There is a storm-surge warning for the Pamlico and Pungo rivers; inundation is expected to reach 2 to 4 feet above normally dry areas near waterways. Rainfall amounts are forecasted in the 1.5 to 2 inch range in eastern Beaufort County and 2 to 3 inches in the western part of the county.

Newkirk said because of the storm’s path, impact in the county is the opposite of what a tropical system normally behaves in Beaufort County: the western part of the county will likely see greater amounts of wind and rain from Isaias than the eastern part.

To view the graphic version of the NWS 6 p.m. update, click HERE.