8,700 without power in Beaufort County 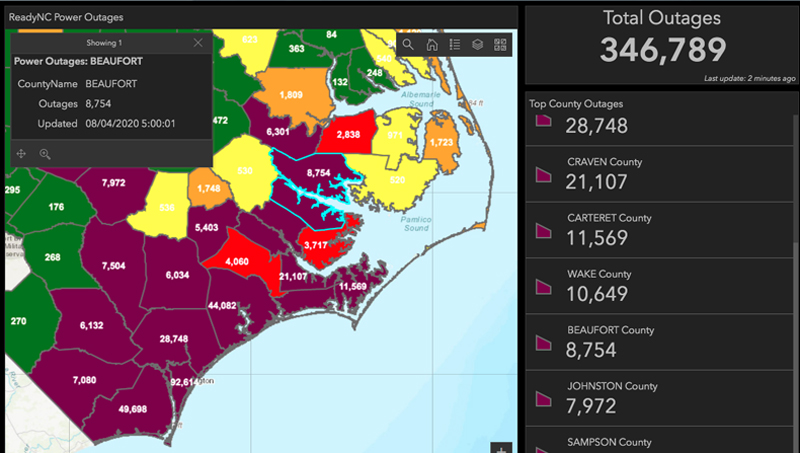 After a night of strong winds and battering rains from Hurricane Isaias, the North Carolina Department of Public Safety reported 8,754 customers were without power in Beaufort County as of 5 a.m. on Tuesday morning. Those numbers did not include Washington Electric Utilities and Belhaven’s numbers, neither of which were not yet reported to Electricities.

Broken down by provider, Tideland EMC Reported 6,637 customers without power in Beaufort County, out of more than 12,000 system-wide. Large outages were reported in Pinetown, Pantego, Terra Ceia and the Pamlico Beach areas. Tideland Corporate Communications Manager Heidi Smith said Monday that damage assessments would begin first thing Tuesday morning. The co-op has brought in an additional 60 personnel to help with the recovery process.

The most efficient way to report a Tideland outage is to text the word “OUT” to short code 85700. Otherwise, call 800-882-1001. Tideland also posts regular updates to social media, and a full outage map can be found at www.tidelandemc.com.

Duke Energy, meanwhile, reported 1,520 outages on the south side of the Pamlico River, mostly along N.C. Highway 33 between Chocowinity and Blounts Creek. More than 400 in Aurora were also without power. To report a Duke Energy outage, call 800-419-6356 or report online at duke-energy.com. A full outage map can be found on the site as well.