City to get flooding fix 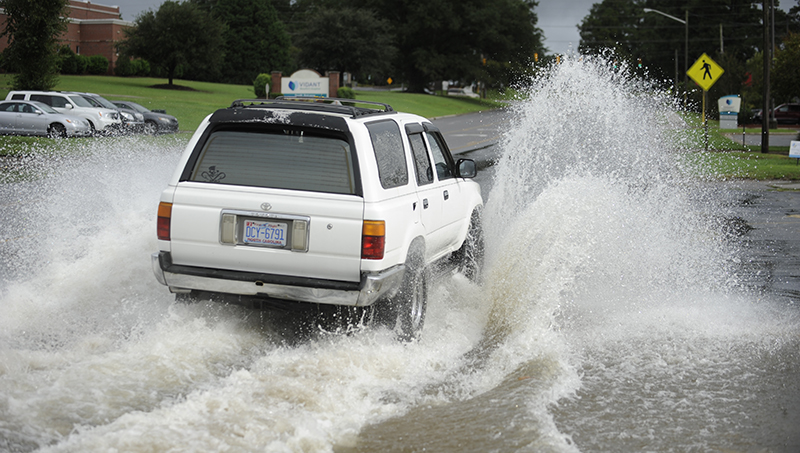 INUNDATED: An SUV plows through water at the intersection of 15th and Brown streets in Washington after a summer downpour. Golden LEAF Foundation has awarded a large grant to the city to fix the aging stormwater infrastructure. (Ashley Vansant/Daily News)

The City of Washington will be the recipient of $3 million grant to fix the flooding problem in the area surrounding 15th and Brown streets.

On Thursday, the Golden LEAF Foundation Board of Directors announced funding for 19 projects across three of Golden LEAF’s program areas, including installation of new and improvement of existing stormwater infrastructure “to significantly reduce flooding around the medical district” in Washington.

“We are excited about partnering with Golden LEAF in an effort to make necessary stormwater improvements within the community. The improved drainage will provide a direct benefit to commercial and residential properties along the 15th and Brown streets corridor, while improving vehicular travel within the Jack’s Creek basin,” said City of Washington Manager Jonathan Russell.

The area has long had problems with flooding, not only during hurricanes and tropical storms, but during hard rains, often cutting off traffic on the heavily trafficked 15th Street, as well as closing roads in the neighborhood off of Market Street. Much of the stormwater infrastructure in the area was laid out in the 1950s and can no longer handle the capacity required to keep stormwater from backing up into city streets.

“There’s been some repairs and some minor improvements to it, but the majority is drastically undersized for the amount of impervious surfaces in the area,” Russell said.

With the development of areas north of 15th Street since the infrastructure was installed, impervious surfaces — hard areas that do not allow water to soak into the ground, such as concrete, asphalt and even rooftops — have contributed to increased amount of runoff.

“(We’ll be) increasing the pipe size to aid the flow to Jack’s Creek itself, so it will move the stormwater to Jack’s Creek more quickly,” Russell said. “That area seems to bottleneck.”

The up-sized lines, along with additional retention areas in the Jack’s Creek basin down to the lift station at East Third Street, will help prevent flooding around businesses and residences in the area, as well as help keep clear roads clear for emergency response vehicles during storm events.

A similar stormwater infrastructure project was included in a North Carolina Department of Transportation’s plan in 2017 to widen 15th Street, but public opposition to that plan led to the city council voting not to proceed with the project.

Russell said he expects the project could begin in six to nine months, while the next three to six months will be dedicated to design, planning, environmental reviews and engineering.

“There’s not a lot of red tape to go through to get the funding, so it should move relatively quickly,” Russell said.

The Golden LEAF funding also will free up money in the city’s stormwater utility fund to work on other projects the city has identified in low-lying areas.

Along with the funding for Washington’s medical district stormwater infrastructure, Golden LEAF announced funding for a healthcare project that will create jobs in a rural county, an agriculture research project, a program to provide leadership development and internship opportunities for more than 300 Golden LEAF scholarship recipients, support for three workforce development programs and 12 other disaster recovery and resiliency projects, according to a press release from the Golden LEAF Foundation. Together the announced awards represent more than $11 million in Golden LEAF funding.