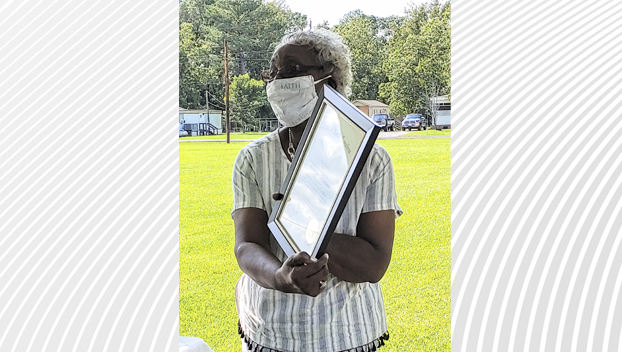 BELHAVEN — A long-time Beaufort County educator has been awarded the state’s highest civilian honor, putting her in the company of recipients including Coretta Scott King, Billy Graham and Maya Angelou.

The Order of the Longleaf Pine was presented to former Belhaven teacher and administrator Christine C. Davis during the 58th Homecoming Celebration of the Belhaven Alumni Club. The event was held Saturday on the grounds of the Belhaven High School, which is now the site of the town’s Boys & Girls Club.

Awarded since 1963, the honor is reserved primarily for North Carolinians who have made significant contributions to the state and their communities through their exemplary service and exceptional accomplishments, according to the Order of the Longleaf Pine website. Recipients must show a proven record of “extraordinary service to the state,” as well as contributions to their communities, extra effort in their careers and many years of service to their chosen service organizations. Also required are several letters of recommendation which, in Davis’ case, numbered twice as many as the award committee requested.

Originally scheduled for May 8, the event was postponed because of shutdowns related to coronavirus. The presentation to Davis was a closely held secret among officers of the group, who nominated her earlier this year. Because the gathering was limited by pandemic-related social distancing restrictions, it was also livestreamed to those who could not be seated under the tent where Davis realized she was about to receive more than the group’s traditional service awards and honors.

The official presentation to Davis was made via speakerphone by Governor’s Office Secretary Michelle Sanders. During the presentation, Sanders talked about her own mother, who was a founding member of the Belhaven Alumni Club.

“So we are home girls,” Sanders proclaimed to the group, which shouted their approval.

Sanders praised Davis for the empathy, passion and compassion she has brought to her 40 years of service as a much-loved teacher and, eventually, grade-school principal in Belhaven.

That opinion was echoed by those showed up to honor Davis.

“She was stern but fair. We knew we were there to learn, but we also got life lessons that have resonated in our hearts for decades,” said Belhaven mayor Ricky Credle, who was a student of Davis’ in sixth grade and whose children were also taught by her. “Some people are in education for a paycheck. Some are there because they love it. And she loved teaching.”

Davis’ response to the award was modest.

“If you really know me, then you know I don’t take awards very easily. I do the best I can with what I do. I am grateful. I don’t think I deserve it, but I thank God that you think me worthy of it,” she said, to even more applause.

Along with the admiration, Davis got plenty of good-natured teasing from friends, coworkers and former students.

“She’s going to tell you what’s on her mind. And if you’re wrong, she’s definitely going to tell you. But she will support you at the same time. She is an inspiration to me,” said Archie Green, a Belhaven resident and previous winner of the Order of the Longleaf Pine.

Green is a co-founder with Davis of “Project DIRECT” which, since 2008, has offered free workshops and classes to area residents dealing with long-term illnesses including diabetes, breathing disorders and cardiac disease.

The occasion was topped off by a long, loud, horn-honking “community salute” escorted by Belhaven police and comprised of more than a dozen cars and trucks full of admirers shouting greetings. The “drive by” circled the school property twice in honor of Davis and those who attended the event.

“I am still overwhelmed,” Davis said. “I never thought I would get this award. It is hard to really believe.”

When asked what she would tell her admirers — especially young ones — about the job she has loved for so long, Davis said to “do what you enjoy, what’s in your heart to do, and it won’t be so hard, because it won’t really feel like a job.”

Also receiving honors at the event was Emma Howard, who graduated with the Belhaven High School class of 1948. A dietician for eight years and a home economics and health aid for 32 years before that, Howard’s community service has included commitments to the NAACP, the Key Women of America, Britthaven Nursing Home, the Southern Christian Leadership Council and serving as councilwoman for the City of Washington. Howard received plaques from the Belhaven Alumni Club, Key Women of America and the Delta Sigma Theta sorority.