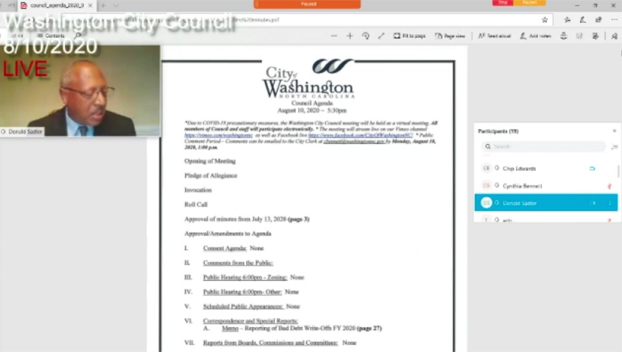 MEETING INTERRUPTED: Monday’s meeting of the Washington City Council, which was conducted entirely by remote means, went dark about 10 minutes into a Facebook Live stream. City Manager Jonathan Russell said the meeting continued after, and a full recording will be posted to the city’s Vimeo page. (City of Washington)

About 10 minutes into this month’s Washington City Council meeting, technical difficulties brought the Facebook Live stream of the meeting to an abrupt end for viewers. According to Washington City Manager Jonathan Russell, the meeting continued afterwards, and a full recording is available on the City 9 cable channel and will soon be posted online.

Following last month’s meeting, after which participants had to be tested for COVID-19, Monday’s meeting was completely remote, with no one in council chambers. Mayor pro tem Donald Sadler led the meeting in the absence of Washington Mayor Mac Hodges, who is in the hospital due to COVID-19.

Among the portions of the council meeting excluded from the livestream were discussions of the city’s annual debt write off, a discussion of new playground equipment at the P.S. Jones Memorial Park and the use of dock space on the Washington waterfront for a private business.

For the City of Washington, and other municipalities, orchestrating live broadcasts of council meetings has proved a unique challenge. According to Andy Olsen, who is contracted to record the city’s meetings, a number of variables, including remote participation from council members and other staff, add to the difficulties.

“The big thing you have with online meetings is there are too many variables,” Olsen said. “Not having everybody in the building is outside of my control, so I can’t control what happens at someone’s residence and what their connections can do.”

In discussions after the meeting, Olsen said the city will likely stream future meetings directly to its Vimeo page, rather than stream to Facebook. A full archive of recent council meetings can be accessed at vimeo.com/washingtonnc.