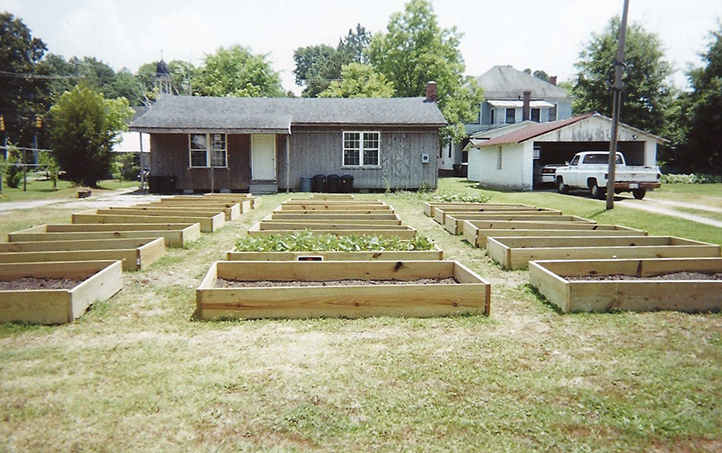 These vegetable boxes were built and used on the Tyrrell County Community Development Commission's property facing Bridge St. in Columbia perhaps as late as 2013. The office building, now deteriorating, is in right background. (TCCDC photo)

The Tyrrell County Community Development Commission has not responded to a July 8 invitation to meet with Columbia aldermen.

White pointed out that “your building has major problems and has become a blight along the 600 block of Main Street,” and he cited details about the carport roof, the main roof, windows and porch issues. “It appears that your organization has abandoned the building and has no concern for your neighbors or to the safety and well-being of the residents of Columbia.”

White said Monday that the aldermen discussed the building’s condition during their Aug. 3 meeting. “They will continue to follow through and hope to meet with Ms. Hill and her board to talk about what needs to be done to improve the appearance and to meet their bylaws as a nonprofit based on community betterment.”

Copies of the manager’s July 8 letter went to CDC board members whose names and addresses are registered on the N.C. Secretary of State’s website. They are:

Cooper wrote to Secretary of State Elaine Marshall that he had “formally resigned from the TCCEC many years ago,” and asked that his name be removed from the website list. He said later Marshall responed with a telephone call.

Tyrrell County Community Development Corporation was incorporated in Oct. 1992, the website states. The most recent post on the CDC Facebook page was May 2013, asking for summer volunteers.