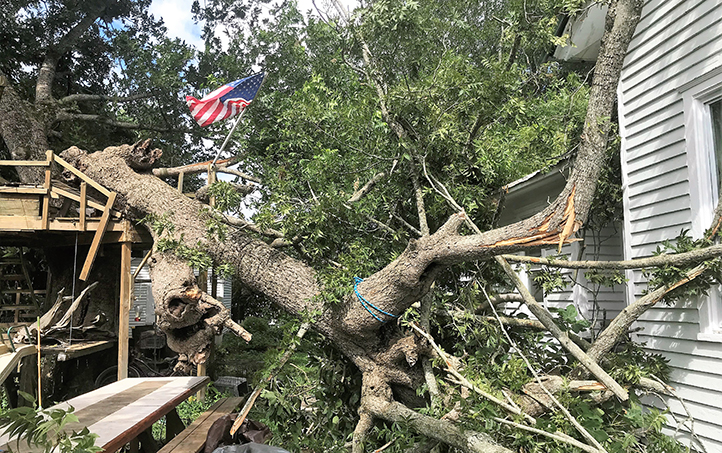 The roofs of two houses on U.S. 64 East in Columbia were damaged when a single tree fell on them during passage of Tropical Storm Isaias on Aug. 4.

Sheriff Kevin Sawyer said no fatalities, personal injuries or other storm damage have been reported to him.

A pecan tree toppled in the Fauth backyard on North Elm Street, striking the house a glancing blow that resulted in minimal damage to the roof, Miriam Fauth reported.

Fauth had earlier attached an American flag to the tree. When she saw it still waving after the tree was toppled, she was reminded of the 15-star flag that still waved over Fort McHenry, Maryland, after the battle there in Sept. 1814, which inspired Francis Scott Key to write The Star Spangled Banner.

Two people were killed when an Isaiad-spawned tornado roared through a mobile home park near Windsor. Twenty people were reportedly hospitalized. Several missing persons, including children, were later found okay.

Isaias generated dozens of warnings and several confirmed tornadoes. The storm came ashore as a Category 1 (74-95 mph sustained winds) in Brunswick County around 11 p.m. Monday (Aug. 3) and pushed northward along the Interstate 95 corridor, about 100 miles west of Columbia.

One Tyrrell resident said he received four or five tornado warnings on his cell phone during the night.

State Department of Transportation crews closed a major causeway over the Perquimans River in Hertford because of accumulated storm surge debris.

The center of Isaias, by then a tropical storm, exited the state into Virginia around 5:30 a.m., but the last surge of winds continued to do damage well into Tuesday morning, driving the waters of Albermarle and Pamlico sounds into Elizabeth City, Manteo and sound-side villages along the Outer Banks, Carolina Public Press reported.

Much of the Triangle and most of Eastern North Carolina reportedly received at least 3 inches of rain during the storm, but rainfall in Tyrrell County appeared to be much less than in earlier storms.