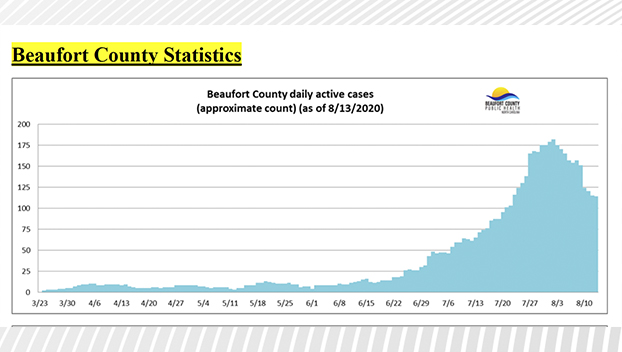 A surge of COVID-19 cases in Beaufort County that started in July has resulted in the deaths of seven people over the past week.

“In short, we went through a high transmission rate in our county — an outbreak in our county — and hopefully, right now, we’ll see that come down and stay down,” said Jim Madson, Beaufort County Health Department director.

The resulting surge in deaths was unfortunately not unexpected, Madson said.

“Typically, deaths result a week or two after a surge goes through the community,” he said.

Beaufort County Health Department reported the county’s first COVID-19-related death on June 26 and its second on July 24, but over the past week, seven were recorded: one last Saturday, followed by three on Monday, two on Wednesday and a seventh Thursday.

“We continue to preach social distancing and being aware of the seriousness of this virus in a certain population,” Madson said. “I continue to ask everyone to maintain a cautious awareness of what’s going on — not panic, I wouldn’t want people to be panicked about it — but we do need to be aware.”

The rate of community spread, as opposed to transmission from close contact with a known positive case, has abated somewhat since that initial surge, he said. Beaufort County’s percentage of overall tests coming back positive had climbed to over 10% in recent weeks, but has now decreased to 8%.

“We’re still a little bit above state level, which is 7%,” Madson said. “My concern right now is if that was a first wave, and we have another wave coming up.”

Madson said his greatest concern is for older members of the community: those who have died from complications caused by the virus have been in the their late 60s or older, with the exception of a 56-year-old who had several underlying conditions.

Congregate settings, such as nursing homes, are closely monitored for this reason, according to Madson.

“At this point, we’re testing them weekly — staff and residents,” Madson said.

According to the North Carolina Department of Health and Human Services report on COVID-19 outbreaks in congregate living facilities statewide, two Beaufort County facilities have had positive cases: River Trace Nursing and Rehab in Washington has had three staff members test positive, and Pantego Rest Home has had three staff members and five residents test positive for COVID-19. No deaths have been reported at either facility. The NCDHHS report was last updated Friday.

Madson said the health department has a protocol—including testing, monitoring of health, quarantining and increased cleaning — if positive cases are confirmed in congregate living facilities.

“With a nursing home, when it comes up positive, we come in with our Environmental Health folks and Communicable Disease folks,” Madson said.

Madson said this week’s deaths have been tragic for many, and encouraged people to keep up their efforts to prevent the spread of COVID.

“All the effort of public health is to try to eliminate risks, and we ask the public to be mindful of those and help us comply with efforts and recommendations,” Madson said. “We have strong, resilient people here, and we’re going to get through this together.”