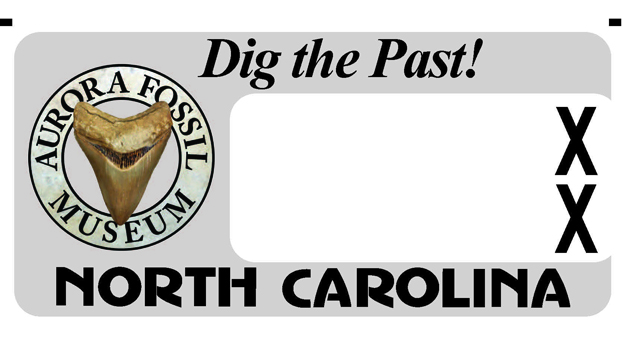 DIG THE PAST!: A mock-up of the new license plate shows a megalodon tooth — the state fossil — and encouragement to “Dig the Past!” The specialized plate will serve as a fundraiser for the Aurora Fossil Museum and promote science awareness across the state. (Aurora Fossil Museum)

A custom automotive license plate featuring a megalodon shark tooth has just been approved by the state legislature, and 500 orders are needed up front to make the plate a reality, according to Aurora Fossil Museum Executive Director Cynthia Crane.

The license plate will feature the slogan “Dig the Past!” above a space for four letters or numbers, limited to allow space for the Aurora Fossil Museum’s logo, which includes the rendering of a megalodon tooth.

Crane said there is one catch: state DMV officials need to receive paid orders for 500 of the Aurora Fossil Museum license plates before they can even begin production.

“This is their way to verify the interest of the public, and the theory that the license plate will help promote science awareness across the state,” she explained.

Megalodons were giant sharks — the largest ever to roam the seas, according to Crane.

Its territory spanned from Maryland to Florida, but Aurora is known worldwide among researchers, as well as shark fans, for the quality of the fossilized teeth found there.

The license plate’s approval is the result of years of efforts behind the scenes at the Aurora Fossil Museum. Crane said a quietly dedicated group of staff, supporters and friends of the popular museum have worked on the application process almost since Crane took the helm about six years ago.

“We just launched the campaign last Friday. It was dormant for a while as we worked out the details, but the fact that Shark Week starts this week makes it the perfect time to start offering these,” Crane said.

With the assistance of former North Carolina senator Bill Cook, the proposal has, for several years, been submitted, rewritten and sent back for finetuning and pre-legislative approvals by the Department of Motor Vehicles, the highway patrol and several other state agencies “to make sure it’s something they can read, among other things,” Crane said.

She said quite a few elected officials have supported the museum’s efforts over the last few years, on both sides of the political landscape.

“That’s the way museums should be, welcoming to everybody and inclusive,” Crane said, noting that Cook has become a member of the museum’s board of directors as a result of his continuing interest in fossils.

The state legislature, under former Gov. Pat McCrory, named the megalodon tooth the state fossil in 2014.

“It’s nice having a state fossil that can be found at beaches in North Carolina, from Onslow County down to the border of South Carolina,” Crane said, explaining the shark’s tooth was chosen as the state fossil because sharks’ teeth last, but their bodies, made mostly of cartilage, do not.

All but $5 of the added cost for these license plates will be donated to the Aurora Fossil Museum. The price for the special plate, with no customization, will be $30 more than the normal cost of registering or renewing a typical North Carolina license plate. For those who want to customize the four letters or numbers on their plate, the cost will be $60 more than that of a typical state plate. The museum will receive a check from the state every three months, which will represent all the $25 and $55 donations that result from the purchase of those unique license plates.

Order forms are available at aurorafossilmuseum.org, by clicking on the “Meg Plate” link in the navigation area at the top of the page, or on the museum’s Facebook page.

Once filled out and signed, the application form and payment should be sent to the museum at 400 Main St., Aurora, NC 27806, as Crane needs all 500 forms and one check from the museum to get the process started. She added that several payment options are offered, including PayPal, for those who want to help reach the state’s minimum mandate and be first in their fossil fan group to attach this unique license plate to whatever land-based ship they sail along North Carolina’s roadways.

For more information, contact Crane by email at director@aurorafossilmuseum.org.