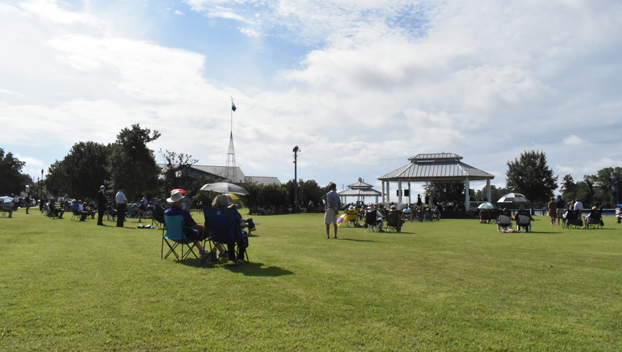 MAYOR MAC HODGES PARK?: Fundraising is underway to install a swing at Festival Park in honor of Washington Mayor Mac Hodges. Additional possibilities include downtown beautification projects and renaming the park in his honor. The mayor’s memorial service, pictured here, was held in the park this past weekend. (Matt Debnam/Daily News)

The Washington-Beaufort County Chamber of Commerce, the City of Washington and the Washington Police Department are raising funds and considering ways to pay tribute to the late Washington Mayor Mac Hodges.

After his passing last week, Hodges’ family requested that donations be made to the East Carolina University Pirate Club, an organization he supported vigorously over the years. The Chamber and the City, along with the family, also want to do something in his memory here in the city he loved so well.

“There were a few projects that the family had mentioned,” said WBCC Executive Director Catherine Glover. “We’re looking at putting in a swing at Festival Park, and if there’s more money leftover after that, we’d do beautification projects at the park and with the (downtown) streetscape.”

While funds raised will flow through the Washington-Beaufort County Chamber of Commerce Foundation, the city would then take responsibility for making the projects happen, an endeavor City Manager Jonathan Russell says Washington is fully on board with.

“I’ve spoken with Catherine a couple of times and they’ve had a lot of interest from people wanting to contribute,” Russell said. “We’ve been in communication with the family for a couple of options that might be agreeable around Festival Park to memorialize Mac. They’re going to collect those funds and work with the family to make a selection moving forward. We’re looking at some naming options for Festival Park, as well as a swing and plaque outlining his tenure as mayor and a brief history on him on the waterfront. We’re looking at a couple of different options, and depending on how much funding we receive, that will determine what we implement.”

Since Hodges’ passing, the community has expressed support online for possibly renaming Festival Park or the downtown streetscape in his honor. Both were places where Hodges spent a lot of time, both greeting visitors to the city and supporting local businesses.

At the Washington Police Department, Police and Fire Services Director Stacy Drakeford says there’s also a desire there to do something in the mayor’s memory. They’re partnering with the Chamber on the swing fundraiser and beautification effort.

“We’re looking at making the Christmas shopping we do with public safety in his honor,” Drakeford said. “He was very supportive of public safety in the city of Washington, making sure we got the equipment we need to perform our job at a high level.”

All of the funds raised will go directly towards the swing and further beautification efforts. Those wishing to contribute to the memorial fund can write a check to the Washington-Beaufort County Chamber of Commerce Foundation, with the subject line “Mac Hodges Memorial.” Donations are tax-deductible and can be dropped off at the Chamber or mailed to P.O. Box 665 Washington, NC 27889