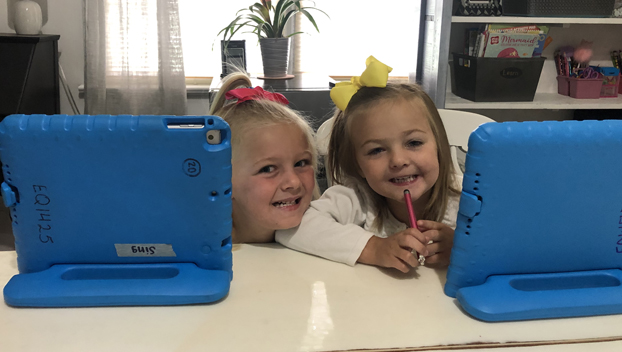 As Beaufort County Schools students returned to the virtual classroom this week, the endeavor has been marked with a blend of successes, shortfalls and anxieties.

For parents and their students, it’s meant adapting to new technology, figuring out alternative arrangements for childcare and forming a new routine. Teachers also have faced challenges with technology, as well as uncertainty about what will happen when students return to the classroom. Steering the ship, administrators at the school and district level found themselves making adjustments and trying to keep remote learning on course.

Remote learning is scheduled to last through at least the first four weeks of the semester at Beaufort County Schools. Students are tentatively slated to return to schools Sept. 14 in a staggered schedule, with students simultaneously learning online and in the classroom on different days of the week. The Beaufort County Board of Education will likely finalize those plans during its meeting Sept. 1.

Touring schools throughout the county this week, BCS Superintendent Matthew Cheeseman says he’s been impressed by the enthusiasm and willingness of teachers to tackle the challenges of remote learning and engage with their students.

“Overall, I’d say we’re on point,” said BCS Superintendent Matthew Cheeseman. “There are still some connectivity issues we’re trying to work with families on. I think that’s probably our biggest issue right now, in terms of what we’re trying to help with. But even so, that’s only a small amount of people.”

At the beginning of the week, a statewide issue presented challenges for students logging into their classes. The school system also had to put about 200 students on a waiting list this week to receive wireless hotspots, when the actual need for those items surpassed the numbers anticipated by surveys conducted on paper and online this summer.

For the most part, Cheeseman says the feedback he has seen from families has been positive, as teachers had the chance to better plan and prepare for remote learning going into the fall semester. Parents can also review their children’s daily lessons to help them work through challenges. On the flip side, he says some working parents have reached out to the school system to share their struggles with finding childcare.

“We’ve been trying to make information available for local daycares and childcare centers and putting families in touch with each other who may be able to support one another,” Cheeseman said.

Another key improvement from the spring semester has been the reopening of school buildings, with teachers leading classes from their physical classrooms. Cheeseman says this offers greater accessibility for parents, who can pick up the phone, type out an email or even visit the school building if they need to. Teachers also have their resources on hand and greater support from their colleagues.

“There should be a greater line of communication,” Cheeseman said. “Our principals and assistant principals have been sending home school messages and continuing to advocate the relationship between teachers and students.”

For Southside High School English teacher Brittany Lane, the first week has been a learning experience for her and her colleagues, almost as much as their students. While she considers herself a tech-savvy person, there are always unknowns to navigate in providing online instruction.

While Lane credits the administration at Southside for its support, she says the process has been stressful. In addition to having to perform their regular duties, teachers sometimes have to take on the role of tech support for their students at the same time they’re building their own grasp of the new online teaching tools.

“I have found that students are helping each other, which has been wonderful,” Lane said. “If there’s something I can’t answer, I ask my students if they can help so and so. I don’t know what they see (onscreen) for certain things, since I have a different view as a teacher than they do. It’s been wonderful to see them coming together and give each other support.”

As Lane and other teachers work with their students to navigate these unusual circumstances, the prospect of students returning to school is another source of concern. From making the transition from, and then possibly having to go back to, exclusively remote learning, to concerns about contracting the virus, Lane says she would prefer for the school system to continue remote learning or wait until it is safe to bring everyone back at the same time.

“As much as I want to see my students, and online learning is not the same, if we come back with half students here and half students at home, I think there is a concern about navigating that,” Lane said. “The other aspect is safety. I’ve spoken with a lot of people that are concerned about the added anxiety of, ‘Am I going to get sick?’ It’s just that fear. Right now, as much as I would love them here, I am alone in my room and have very little contact with people. That anxiety isn’t weighing on me on top of having to do all of this.”

For parents and students, the reaction to remote instruction has been mixed. While some students have thrived in an online environment, others have struggled. Those challenges are compounded by varying levels of internet access, work schedules and child care.

Lesa Naylor, who takes care of her grandchildren, Blair and Chance, says there have been relatively few hiccups with remote learning, but that she would still prefer for them to be in school. Both Eastern Elementary students, Blair is a first grader and Chance just started kindergarten.

“That one-on-one touch is not there with virtual learning, but it’s not as bad as I thought it would be,” Naylor said.

For Chance, who started kindergarten online, Naylor said it’s been challenging not having those social relationships children form that first year of school. It helps, she says, that he was assigned the same teacher as his older sister. Despite the circumstances, Naylor credits EES kindergarten teacher Lauren Hodges with helping keep the kids on track with their learning.

“We never stopped school over the summer,” Naylor said. “We kept going. Mrs. Hodges gave us work through the complete summer to keep for both of them. We just set up little places in our home, and they each have their own desk, iPad and pencils. That’s where we go to school. (Hodges) has gone above and beyond anything she needed to do.”

For Eileen Dixon, the perspective is a little different. She has three children, a third grader, a seventh grader and a high schooler. While Dixon is able to work from home, she says keeping track of all three in their schoolwork can be difficult, but the experience has given her a new perspective on her children’s education.

“I personally love it, because it gives me a feeling of being able to be there and help with their education; to be more involved with it, see what they’re doing every day and see how they’re handling it,” Dixon said.

Overall, she says her students haven’t run into any significant issues so far.

“There’s going to be some kinks for us to work out, and I’m not computer savvy at all, but the teachers and the staff at the school are always there to answer questions, which is amazing,” Dixon said. “Honestly, I have more contact with the teachers in school, and more of a relationship, with the kids being at home for virtual learning.”

The Hackney, Rotary step up to address student internet access

Editor’s note: In a previous version of this article, it was incorrectly stated that the lack of wireless hotspots was... read more