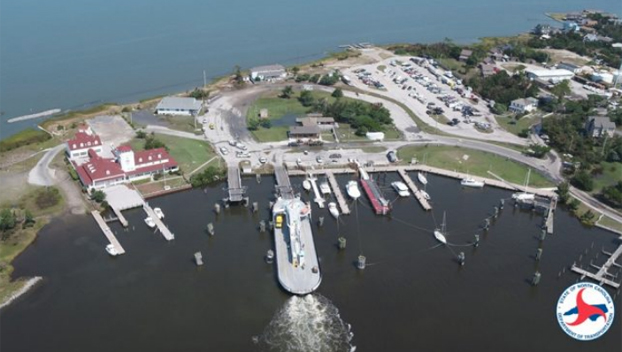 OCRACOKE — In July, the North Carolina Ferry System announced that they were temporarily reducing service on the Pamlico Sound between Cedar Island, Swan Quarter and Ocracoke due to critical shoaling issues in the ferry channel just outside of Ocracoke’s Silver Lake Harbor.

The latest survey at that time by the Army Corps of Engineers showed water depths in Big Foot Slough as low as eight feet. That meant the ferry system’s two largest sound-class vessels, the M/V Swan Quarter and the M/V Sea Level, could not traverse the area safely. Ferry service was reduced to one boat a day leaving each port of departure, during some of the busiest summer travel times on our coast.

The North Carolina Ferry System, along with Hyde County, contacted Carteret County for assistance in dredging the ferry channel for the Cedar Island to Ocracoke Ferry. Carteret County and Hyde County find that this dredging is necessary not only to preserve the flow of traffic along Highway 12, but to preserve jobs during this time of economic depression. In addition, viable evacuation routes are critical to public safety in areas that are commonly threatened by hurricanes.

Hyde County and the North Carolina Ferry System do not have the funding in their current budgets to facilitate the funding match requirements for the U.S. Army Corps of Engineers or others to dredge this channel. Because of the urgency of this request and funding limitations, the only expedited path forward is for Carteret County to provide this match on behalf of Hyde County. It is Carteret County’s intention to lobby the legislature to reimburse Carteret County this expense in their next session.

Hyde County will utilize these funds to apply for and obtain the North Carolina Shallow Draft Navigation Funding necessary to complete the dredging, and will serve as the local government sponsor to facilitate the project. Hyde County will also support Carteret County’s efforts in seeking reimbursement of the local match from the state.

“We are thankful that Carteret County has stepped up to help in a time when we simply don’t have the funding for this project,” said Earl Pugh Jr., chairman of the Hyde County Board of Commissioners. “Our ferries are lifelines to those living in and visiting Ocracoke Island, which is still struggling to rebuild after the devastation of Dorian. We look forward to working with Carteret County and other partners in the future to ensure state and federal funding is made available to keep our channels maintained and to avoid this type of reduction of service again. This is a true example of neighbors helping neighbors for the common good.”

Big Foot Slough is a federally authorized channel, which means that the federal government maintains them, if funding is available. However, federal funding to dredge Big Foot Slough has decreased substantially over the last 10 years. One way to secure additional funding has been the development of the Shallow Draft Navigation Channel and Lake Dredging Fund in North Carolina.

The fund provides the state share for dredging projects, and requires that state funds are matched with local funds. The state portion of the fund comes from a small percentage of the gas tax, as well as a percentage of boater registration fees. In this case, Carteret County is partnering with Hyde County to provide that local match.

“Carteret County depends daily on the frequency and access of the State Ferry system,” said Bill Smith, chairman of the Carteret County Board of Commissioners. “Many of our employers depend on people and supplies to be ferried between these various points every day. It is now more critical than ever to keep our ferry routes open and navigable. Time is of the essence and Carteret County expects in the future for the federal and state partners to sufficiently plan and pay for emergencies such as this. Carteret County has always enjoyed great partnerships with all of our neighboring counties, and this project and many others exemplify the commitment Carteret has steadfastly made to help our neighbors in need. This project is simply about doing the right thing and that’s why Carteret made the choice to help out.”