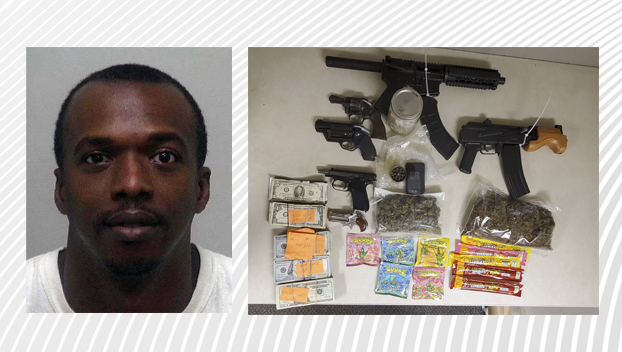 PANTEGO — A controlled purchase of cocaine by the Beaufort County Sheriffs Office Drug Unit deputies led to the seizure of 420 grams of marijuana, THC-infused candies, multiple firearms and more than $19,000 in cash last week.

“We’ve been getting information on Mr. O’Neal for years,” BCSO Drug Unit Lt. Russell Davenport said. “Sometimes we don’t have enough time to work everybody, but we kept getting more information, enough for us to start an investigation on him. We already had prior investigations where we’ve arrested him for selling drugs.”

After investigators recently purchased cocaine from O’Neal, they served a search warrant at his residence, discovering 420 grams of marijuana, five packages of Nerds Rope candy and five packages of gummies, each containing THC, digital scales, bags used to package drugs, $19,229 in cash and six firearms, which O’Neal possessed illegally, according to the press release.

Davenport said O’Neal was not in possession of cocaine at the time of his arrest, but was charged for the previous sale to deputies. He went on to say the THC-infused candies found during the search are becoming more prevalent in the area, likely coming from states where such products are legal.

“A lot of people get them in through the mail, where states have legalized THC,” Davenport said. “It’s a dangerous substance, especially when it’s packaged as Nerds Ropes or gummies that kids and children could get ahold of. Any kid that loves candies would eat those things without knowing what they’re eating.”