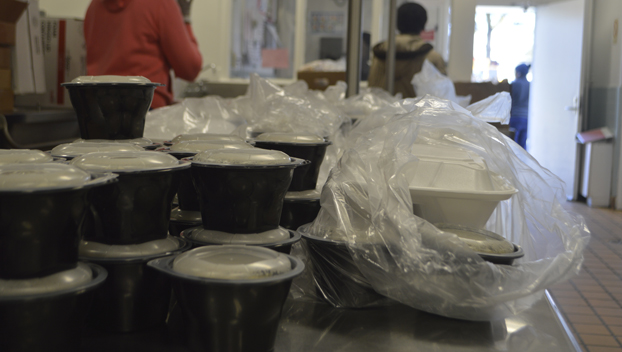 MEAL SERVICE: A positive COVID-19 case in the cafeteria at Eastern Elementary School prompted a quick adjustment from child nutrition staff, with Washington High School’s cafeteria providing drive-thru meals at the site Monday. The employee who tested positive is quarantined at home, and their coworkers are also being tested.

Positive COVID-19 tests have prompted two closures in educational settings in Beaufort County this week, one at the Eastern Elementary School cafeteria and the other at Care-O-World’s Washington facility.

According to Care-O-World Executive Director Jason Carrow, a cluster of COVID-19 cases at the learning center’s Washington facility has prompted its temporary closure. The cluster involved six staff members and one student, all of whom were reporting mild symptoms as of Tuesday.

On Aug. 16, the learning center shut down its infant classroom after a child tested positive for the virus. Further testing last week revealed that two teachers, who were already in quarantine, also tested positive. Four additional teachers were tested Monday, with their results coming back positive Tuesday.

The facility then closed at 1 p.m. Tuesday and is estimated to reopen Sept. 8. Operations at the Care-O-World facility in Chocowinity are not affected. A letter sent from Carrow to parents Tuesday laid out the situation, and the reasons for closing down the Washington learning center.

“This decision was made to protect the health and safety of staff members, our students and everyone’s family and friends,”Carrow wrote. “We thank the Beaufort County Health Department for their guidance and availability during this time.”

The learning center had its first positive COVID-19 case in July, when a cafeteria worker tested positive for the virus. Since the pandemic began in March, the learning center has been able to maintain operations, closely following recommendations from the Beaufort County Health Department and the North Carolina Division of Child Development and Early Education.

“This is a scary and stressful time for everyone involved,” the letter read. “Our staff has worked tirelessly over the past 5 to 6 months ensuring that our building and staff operate as safe as possible. We have used many gallons of bleach, completed thousands of temperature checks along with many other first line of defense measures. This is not the outcome anyone wants, but our commitment is firm to serve the public, and serve in an open and transparent manner.”

While the center is closed, frozen meals will be provided for students in need, and Care-O-World will be in contact for the duration of the closure.

For the parents who are now without childcare due to the closure, employers can receive federal reimbursement for up to two-thirds of the time employees must take off to care for their children. According to guidance from the N.C. Division of Child Development and Early Education, parents are not recommended to enroll their children in new childcare settings after a facility is closed due to the virus.

According to Beaufort County Schools superintendent Matthew Cheeseman, the school system learned Saturday that a school nutrition employee at Eastern Elementary School had tested positive for the virus. That in turn prompted BCS to close down the cafeteria, with the Washington High School child nutrition staff stepping up to provide drive-thru meals at the site.

“The employee tested positive Saturday, did not require a hospitalization and is at home quarantining,” Cheeseman said. “We shut down the cafeteria for deep cleaning, but our school nutrition team is so dynamic that they prepared all the meals over at Washington High School and brought them over.”

Cheeseman says there were a number of other school nutrition employees at EES who are being tested for the virus. By shuffling other employees from throughout the district, Cheeseman said meal preparation would likely resume at EES beginning Wednesday.

Teachers and a handful of exceptional children students were in the building, but there was no contact with the child nutrition staff. Once schools bring students back for in-person learning, meals will be delivered to classrooms each day to maintain that separation.

In a separate incident, Cheeseman says a staff member at Southside High School also tested positive for COVID-19 on Monday. That staff member was in contact with two exceptional children students on campus, and Cheeseman says the parents of those students have been notified.

“From there, the protocol is that the health department will then work with the person who has tested positive to determine tracing,” Cheeseman said. “I don’t believe it required a hospitalization; I believe the employee has been quarantined and the room has experienced a deep cleaning (Tuesday).”

According to Beaufort County Health Department Director Jim Madson, the transmission of COVID-19 in educational settings is likely to occur, but the contribution to overall community spread is not as great as one might think.

“It’s a concern, but expected,” Madson said. “There are different studies that show that the transmission occurs, but doesn’t really contribute a lot to a community’s outbreaks when they have one. It’s expected, and the real key would be for us to be prepared on how we respond when it happens. We’re not going to prevent every case that occurs, because there’s too much widespread transmission, so we have to lower risk as much as possible.”

Since the pandemic began, the health department has been working hand in hand with local childcare providers and the school system to help them navigate recommendations designed to protect students and staff. In taking actions such as enhanced cleaning, social distancing, increased hand washing and regular symptom screenings, Madson says schools and childcare facilities are doing a good job in reducing the risk of transmission.

Acting as a liaison to decision makers in both of those settings, Madson says he thinks school system can safely bring students back into the classroom when the time comes. The Beaufort County Board of Education is scheduled to make a decision on the resumption of in-person instruction during its meeting Sept. 1.

“There’s more at issue than just the spread of COVID,” Madson said. “There’s daycare issues, the need for socialization and the need for face-to-face education. There are a lot of factors that go into play with the Board of Education and the superintendent. We’re just one facet in that whole decision tree.”