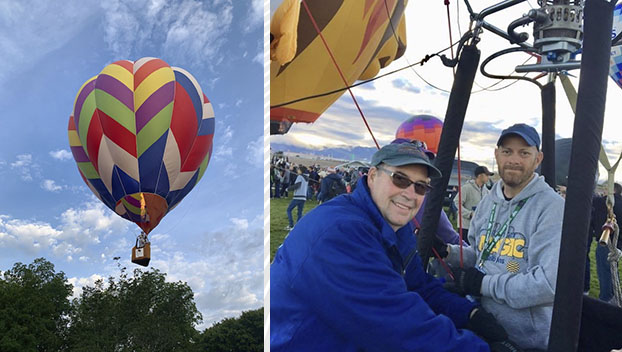 HOPES FLY HIGH: Skip Van Wyk (left) and Neal Langford, co-owners of IBX Balloon Flights, have goals as high as the sky for the business they run in Bath. “IBX Flyer” hovers above the trees during one of its flights over Bath. (IBX Balloon Flights)

BATH — Coronavirus is not deterring two Bath residents from pursuing the high-flying dreams they came to town with in 2018.

“Hot air balloon flights are new and exciting here. People stop their cars, get out and take pictures when they see us out here,” Langford said.

Langford described their balloon, IBX Flyer, as the “average” hot air balloon, measuring 70,000 cubic feet, which works out to about the height of an eight-story building with a width similar to that of a large North Carolinian farm house.

Langford took his first ride as a 5-year-old in Albuquerque, where ballooning has long been considered part of the area’s culture. Mentored by several friends who were already flying, he received his ballooning license in the early 1990s, and has worked for Rainbow Ryders and international corporate hot air balloon group Exclusive Balloons since the early 2000s, flying clients to hot air ballooning events worldwide.

Among his favorite experiences, Langford includes a 2001 trip to the Russian National Ballooning Championship and a photo op above the 440-year-old Castle Longleat in Bath, England, sister city to Bath, North Carolina. Langford said he and Van Wyk later discovered a commemorative bust of Alexander Thynn, first Marquess of Bath and owner of that castle, is located at St. Thomas Episcopal Church on Craven Street.

“We didn’t know about the monument until we moved back to Bath,” he said.

For Langford, IBX Balloon Flights is a product of lifelong hobby and providing an new adventure in Beaufort County.

“I grew up ballooning. It’s been my life since I was a kid. There are no balloons out here,” he said of the Bath area. “But I wanted to continue flying, so starting this business was the perfect opportunity to do that.”

Langford pilots the IBX Flyer while Van Wyk, as crew chief, makes sure the balloon gets set up correctly, then “chases” the airborne vessel by car to its eventual landing spot. Before takeoff, passengers must don pandemic-appropriate face masks and confirm the absence of illness-related symptoms. Langford said the risk of transmission is “practically minimal at most, since you are part of the wind when you are in a balloon, and passengers are staring at the landscape, hardly at each other.”

He said people’s reasons for taking a flight have ranged from simple curiosity and environmental appreciation to marriage proposals and Make-A-Wish fulfillment. Once Van Wyk helps passengers disembark and, before dismantling the craft, a closing ceremony is held that includes a champagne toast, a short history of ballooning and the traditional balloonists’ prayer: “May the winds welcome you with softness, and may the sun bless you with its warm hands back into the arms of Mother Earth.”

“I think it’s great,” said Dan Dalen, who Langford described as a hot air ballooning mentor, a father figure who took him under his wing. “He’s doing his own thing. He loves flying. And anybody who loves it has just got to keep doing it.”

Positive COVID-19 tests have prompted two closures in educational settings in Beaufort County this week, one at the Eastern Elementary... read more