New director at the helm of BMH Regional Library 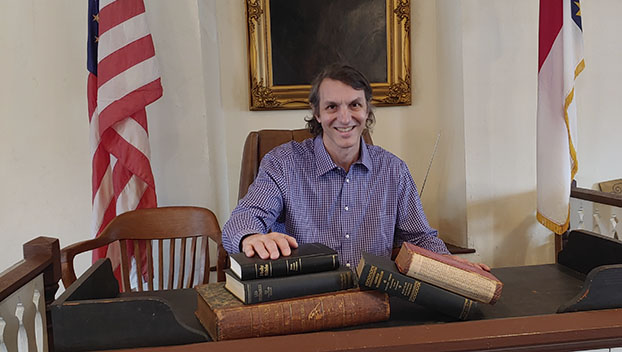 A Pennsylvania native who has always had a love for North Carolina has taken the helm of the BHM Regional Library system.

“He already has a good handle on what’s going on. We are just here to support him,” she said, adding that the BHM system supports libraries in Beaufort, Hyde and Martin counties.

Fitzgerald has been a librarian in one capacity or another since 2004. He has been director of several libraries since graduating a masters’ program at ECU-Greensboro in 2010. Fitzgerald said he applied for the opening, so he could get back to North Carolina.

“I’ve been in rural library administration since 2013, but I haven’t had the opportunity to live close to water before, not even in California, where the ocean was three hours away. It’s a huge bonus to be near the river here. The fact that I can just walk out the library’s door and be at the water is amazing,” Fitzgerald said.

Fitzgerald said he is eager to work on the challenges ahead of him at the libraries he is now responsible for.

“Long term, the region needs to devise a way of dealing with population decreases, despite the fact that most rural communities are seeing increases,” he said.

He explained that migration away from rural areas in eastern North Carolina seems to be the pattern because younger residents are attracted to increased job opportunities elsewhere. “Maybe the COVID-19 epidemic will change some of that, because all of a sudden people don’t want to live so close to each other in many cities,” he said. “But we still have to plan for that for all the readers who need us and the funds it will take to meet those needs.”

Fitzgerald said his biggest challenge for Washington’s BHM facility is to find our niche, considering that the Brown Memorial Library is four blocks away.

“We want to clarify our reason for being, then operate from that position, rather than planning to compete with Brown’s facility,” Fitzgerald said.

In the meantime, changes have already been accomplished at the historic former court building, which opened back up this week for library patrons. Fitzgerald said a service desk has been installed just inside the front door so people won’t have to walk into an empty hallway.

“Now we can greet and direct patrons when they come in, which spares them from trying to navigate a very challenging building,” Fitzgerald said.

The library also received a new paint job and carpeting throughout the first floor. Functional improvements include a larger e-book cyber-platform, to speed patrons’ ability to access books from other libraries in the BHM network.

“Basic library functions are back,” he said of the library’s current service level. “We have reorganized computers to one space, just not as many because of social distancing requirements. Our other in-person programs are on hold for the moment, but most other things are available.”

Fitzgerald said negative economic predictions for the country — and therefore funding — do not worry him.

“This has always been a ‘people business.’ Directors like me are person-to-person with our customers staff, and community. These are the ones who count. It’s not only about cutting a check,” Fitzgerald said. “It is still, and will always be, a relationship thing.”