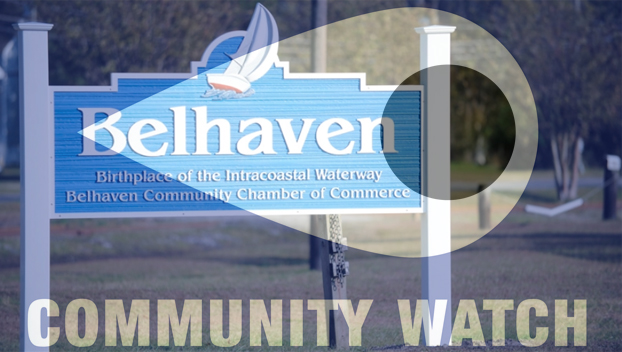 BELHAVEN — An effort to establish a new community watch in Belhaven and the surrounding area is gaining momentum, fostering closer ties between local police and the community they serve.

According to Belhaven Community Watch organizer Cris Noble, the purpose of the group is to help and encourage law enforcement officers, while protecting, maintaining and enhancing the community for residents and guests.

“There are a number of us who were wondering what we can do to help support our law enforcement officers and improve our community,” Noble said. “I found out from (Belhaven Police Chief Fred Clingenpeel) that the community watch program they once had kind of dissolved, so what we’re looking at doing is reestablishing the community watch, but on a wider scale, both geographically and in terms of our mission.”

Membership in the new group is open to anyone in Belhaven, Pantego and northeast Beaufort County. In terms of its mission, Noble says the community watch will provide support for law enforcement in traditional ways, such as bringing public safety issues to their attention, but also through the simple act of prayer.

“My vision is to have a community watch with the traditional keeping an eye on things, and communicating with police when we see an issue, but also having two subgroups,” Noble said. “One would be a group that’s dedicated to supporting police and looking at intelligent and legal ways to do so. The other group would be getting some prayer warriors together and focusing on spiritual aspects.”

So far, Noble says the group has generated considerable interest, with 26 people attending the first meeting Aug. 16. He says he hopes to make the community watch a diverse effort, representative of the Belhaven community as a whole.

“The relations between police and the community and between the various races are actually doing pretty well in Belhaven,” Noble said. “I think the law enforcement officers and the chief of police are very interested in maintaining a good relationship with the community.”

“Anytime you can get people in a town together, working for the same cause, it’s always great,” Belhaven Mayor Ricky Credle added. “We live in a small town in a rural area, and having everybody talking and expressing their concerns, it gets it out in the open before something takes place. It’s better to be proactive than reactive. I’m a firm believer in that.”

From the law enforcement perspective, Clingenpeel says he appreciates the effort, which comes at a time when relations between police and citizens are so tense in other parts of the country. Like Credle, he sees the new community watch as a proactive means to addressing potential problems in the community.

“It’s a way for them to communicate with us, and I think it’s a wonderful thing,” Clingenpeel said. “The police department had a community watch years ago, and we just didn’t have the participation. About two years ago, we were getting smaller and downsizing and just didn’t have the manpower to uphold it anymore. Cris Noble took up the task and in today’s climate, with all that we’re barraged with in the news media, the participation in the group is fantastic.”

The next meeting of the Belhaven Community Watch will be at 4 p.m. Sunday at The Market in Belhaven. The rain location will be in the Belhaven Civic Center. For more information on how to get involved, email Noble at noble1@nccumc.org