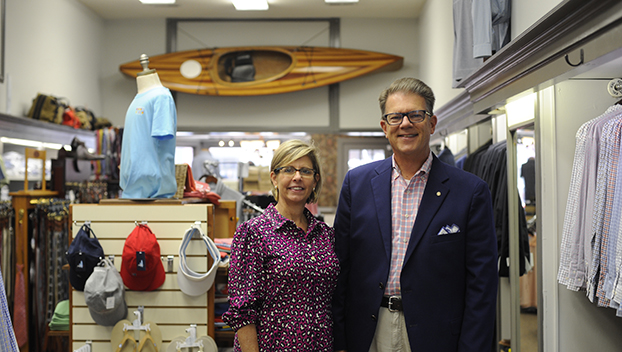 PASSING THE TORCH: Ronda Lyons is the new owner of Russell’s in downtown Washington, which frees up longtime owner Russell Smith to focus on what he’s always loved about retail: customer service. (Vail Stewart Rumley/Daily News)

With ongoing construction bringing the streetscape project to fruition, downtown Washington is in a transition phase — as is one of its most beloved retailers on West Main Street.

Russell Smith and Ronda Lyons, the team at Russell’s Men’s Shop, recently announced the two have switched roles, with Lyons taking ownership of the business and Smith focusing on what he loves most about retail: customer service.

“I love to sell and work, but I’m so tired of the computer and the paperwork,” Smith laughed. “She’s very deserving. She’s been here a long time, and she deserves it. She knows all our sales reps, the ins and outs of the business. … She and I have the same retail brain.”

Smith has been working downtown retail since he was 14 years old, a new hire at Larry’s Shoe Store. He learned the menswear trade from Hilton Sawyer, owner of Hilton’s Men’s Shop, and in January 1983 branched out on his own, when he purchased Bowman’s, which he renamed Russell’s.

Lyons joined Smith in the business in 2007, expanding the business from strictly menswear to women’s and children’s clothing and accessories.

“I had sales reps 13 years ago that told me that putting in ladieswear would be a big mistake, but it was actually the best thing I ever did. It took us to the next level,” Smith said.

For Lyons, taking on the role of business owner is another next level achievement, one that came with few reservations despite the global pandemic that has negatively affected the retail industry.

“My husband and I talked about it, through this pandemic, but we have confidence in our town and the customer service we provide, and we took a leap of faith that it’s all going to work out,” Lyons said. “I think it’s a great opportunity.”

Like Smith, Lyons believes that customer service is the key to building a retail business — a customer’s trust is far more important than making an immediate sale.

“To learn this business, you have to work in it. I learned from Hilton, and Ronda learned from me,” Smith said.

Smith may be passing down the tradition, but he’s not getting out of the retail business anytime soon.

“Rhonda said she wants me to come to work and be happy waiting on people. That’s what I want to do,” Smith said. “It’s been a nice adjustment. It really has.”