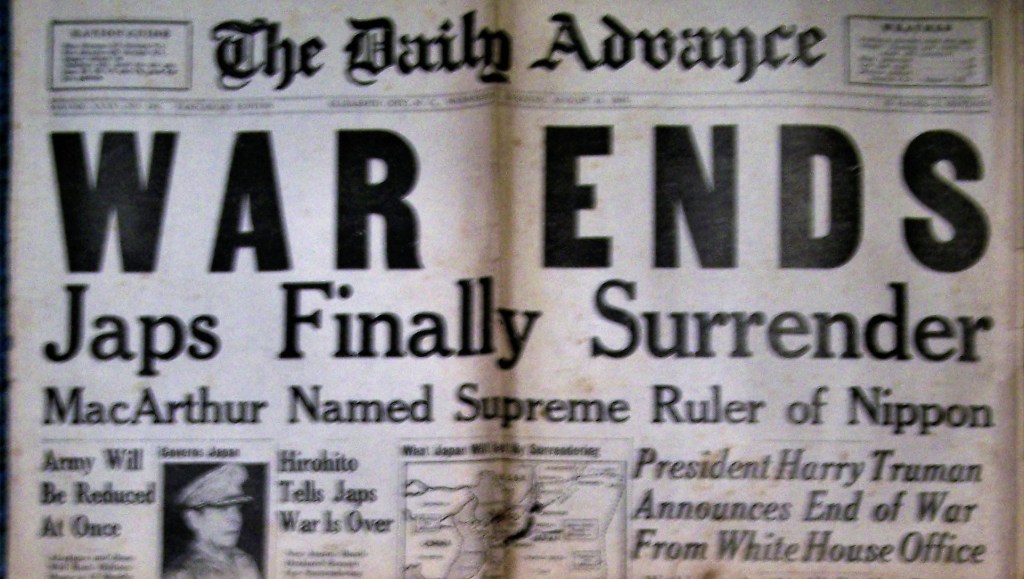 President Truman announced from the White House at 7 p.m. on Aug. 14, 1945, that Emperor Hirohito and the Japanese government had pledged to surrender, and that General MacArthur was to accept the surrender when arrangments could be completed.

“Victory celebrations began in earnest, with the citizens of every city and hamlet in the nation pouring joyfuly into the streets, blowing horns and spreading the good news within seconds after the surrender flash” was broadcast over the radio, reported The Tyrrell Times.

The surrender ceremony began at 9 a.m., Sunday, Sept. 2, aboard USS Missouri in Tokyo Bay, which was broadcast worldwide via radio. It took just 23 minutes for the Japanese foreign minister to sign on behalf of the government, for Yoshijiro Umezu to sign in behalf of the Japanese Imperial General Headquarters, for General MacArthur to accept the surrender, and for nine Allied officers to sign for their governments.

A nine-minute United News newsreel account of the surrender ceremony is available online at https://www.youtube.com/watch?v=4EqRTWMVqMY

For the last year of the war May Cohoon Carawan of Columbia published a monthly newspaper called The Tyrrell Times. She compiled an Honor Roll in 1945 that names about 600 Tyrrell men and women who served in the armed forces or the merchant marine during World War II. The Tyrrell County Genealogical and Historical Society intends to publish the names sometime later this year.

Below is the text of the document that officially ended the Second World War, which began six years earlier with Hitler’s invasion of Poland on Sept. 1, 1939:

We, acting by command of and in behalf of the Emperor of Japan, the Japanese Government and the Japanese Imperial General Headquarters, hereby accept the provisions set forth in the declaration issued by the heads of the Governments of the United States, China, and Great Britain on 26 July 1945 at Potsdam, and subsequently adhered to by the Union of Soviet Socialist Republics, which four powers are hereafter referred to as the Allied Powers.

We hereby command all Japanese forces wherever situated and the Japanese people to cease hostilites forthwith, to preserve and save from damage all ships, aircraft, and military and civil property and to comply with all requirements which my be imposed by the Supreme Commander for the Allied Powers or by agencies of the Japanese Government at his direction.

We hereby command all civil, military and naval officials to obey and enforce all proclamations, and orders and directives deemed by the Supreme Commander for the Allied Powers to be proper to effectuate this surrender and issued by him or under his authority and we direct all such officials to remain at their posts and to continue to perform their non-combatant duties unless specifically relieved by him or under his authority.

We hereby undertake for the Emperor, the Japanese Government and their successors to carry out the provisions of the Potsdam Declaration in good faith, and to issue whatever orders and take whatever actions may be required by the Supreme Commander for the Allied Poers or by any other designated representative of the Allied Powers for the purpose of giving effect to that Declaration.

The authority of the Emperor and the Japanese Government to rule the state shall be subject to the Supreme Commander for the Allied Powers who will take such steps as he deems proper to effectuate these terms of surrender.

By Command and in behalf of the Emperor

of Japan and the Japanese Government

By Command and in behalf of the Japanese

Accepted at TOKYO BAY, JAPAN at 0908 I on the SECOND day of SEPTEMBER, 1945, for the United States, Republic of China, United Kingdom and the Union of Soviet Socialist Republics, and in the interests of the other United Nations at war with Japan.

Supreme Commander for the Allied Powers

Provisional Government of the French

Kingdom of the Netherlands