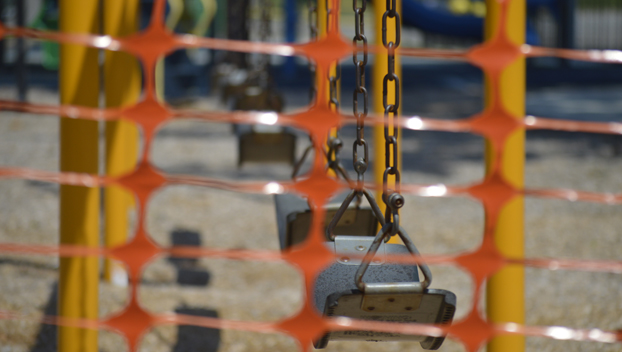 READY TO REOPEN: For months, orange netting has kept the playground at Havens Garden inaccessible to the public. Starting Saturday morning, however, children and families can once again enjoy a day on the playground. (Matt Debnam/Daily News)

As North Carolina enters Phase 2.5 of reopening this weekend, the sounds of laughter and fun will soon fill the playgrounds of Beaufort County after an absence of several months.

For the City of Washington, the easing of restrictions at the state level means residents will see a gradual reopening of local facilities, starting with the popular playground at Havens Garden on Saturday morning.

“We are very excited that the phases are moving along, however, we are doing everything cautiously and safely, because we don’t want to put anybody at risk,” said Washington Parks and Recreation Director Kristi Roberson. “But we do realize parks and recreation is an avenue for stress relief for people, parents and families.”

Because of the timing of North Carolina Gov. Roy Cooper’s announcement Tuesday, Roberson said her staff has had to figure out plans for reopening in a short time frame. The idea, she says, is to reopen Havens Garden’s playground equipment this weekend, then have other city playgrounds open by Sept. 11, if not sooner.

“We don’t want to hold up opening because the signage wasn’t ready, but we’ll be operating under the guidelines from the CDC,” Roberson said. “We’re encouraging people to wear masks, to wash their hands and socially distancing.”

Roberson said she would also encourage parents to use good judgment if playgrounds appear crowded when they arrive with their children.

In Belhaven and Chocowinity, the restrictions on parks and playgrounds haven’t been quite as tight, though both municipalities have encouraged social distancing for residents using recreation facilities.

“We’ve already had ours open with social distancing,” said Chocowinity Mayor Jimmy Mobley. “Our hiking trail was not closed because it was limited, and the little league teams haven’t been playing.”

“I think we will certainly see increased activity,” said Belhaven Town Manager Lynn Davis. “We’ve had our park open, but the playground equipment has been closed. One of our parks is a waterfront park where people can swim. That’s always a popular park, and I think we’ll see increased use of it this weekend.”

In all cases, municipalities are encouraging visitors to continue practice social distancing when in the parks.