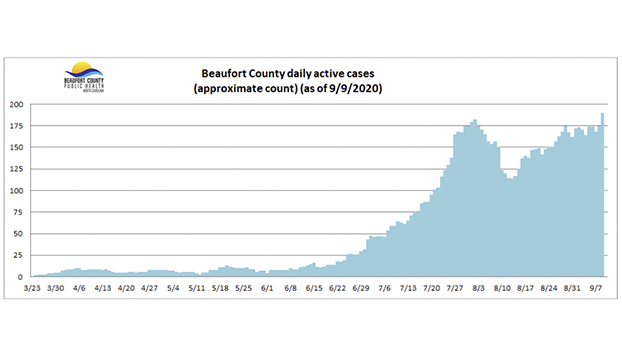 CASE COUNTS: Beaufort County’s active COVID-19 cases per day have, for the most part, remained in the 130 to 170 range since July, about four active cases per 1,000 county residents. On Thursday, that number increased to 190 active cases. (Beaufort County Health Department)

2 deaths, 3 on ventilators due to COVID

On the same day two more deaths from COVID-19 complications were confirmed, the county’s case count jumped by 57 new cases.

On Thursday, Beaufort County Health Department Director Jim Madson reported the deaths of two Beaufort County residents — one, age 70; the other, 84 years old — on Sept. 3 and Sept. 6. Madson said he received death certificates listing the cause of death Thursday; both deaths occurred at Vidant Medical Center in Greenville.

The number of Beaufort County residents who have lost their lives to COVID-19 complications now stands at 12 — seven of which came during a six-day period in mid-August. Of the 14 residents now hospitalized by the virus, three of them are on ventilators. Madson said he was unsure whether Beaufort County is seeing a repeat of the rising hospitalization numbers, followed by multiple deaths, that happened last month.

“I believe that we need to be prepared for it to be. As a community, we need to realize that some of the people that are hospitalized right now are our more vulnerable people. And hopefully the treatments will work, but it’s a very vulnerable population,” he said.

One reason for the jump in positive case numbers — 30 on Wednesday, 57 on Thursday — can be attributed to outbreaks in some local long-term resident facilities, according to Madson.

“A lot of those came from us testing the resident homes, long-term care facilities — not all of them, but quite a bit of them. … We’re investigating four total in the county and, by investigating, I mean we’re monitoring them. We’re doing weekly tests on all the staff and residents. As soon as someone comes up positive, they’re isolating them,” Madson said. “It’s probably introduced by asymptomatic people, but once it gets into a residents home, it’s hard to stop it. The homes, I know they’re doing everything they can to keep it from getting in there, and once it pops up they’re working with us to get those people isolated.”

According to the North Carolina Department of Health and Human Services’ “COVID-19 Ongoing Outbreaks in Congregate Living Settings Report,” the following facilities currently have cases:

According to the NCDHHS’ “COVID-19 Ongoing Clusters in Child Care and School Settings Report,” the following facilities currently have cases:

No COVID-19-associated deaths have occurred in these Beaufort County facilities, according to both reports. The reports are updated every Tuesday and Friday by 4 p.m., the NCDHHS website states.

Madson said it’s important to continue to take precautions to prevent the spread of the virus.

“To reemphasize: we need to be protective of each other and doing our social distancing, especially for our most vulnerable. We have a large population of elderly people in the county, so we need to think about them,” Madson said. “I think it’s going to be with us for a while.”

(This report is condensed from an article by Dr. Joyce Bateman Giglioni, which is scheduled to appear in its entirety... read more