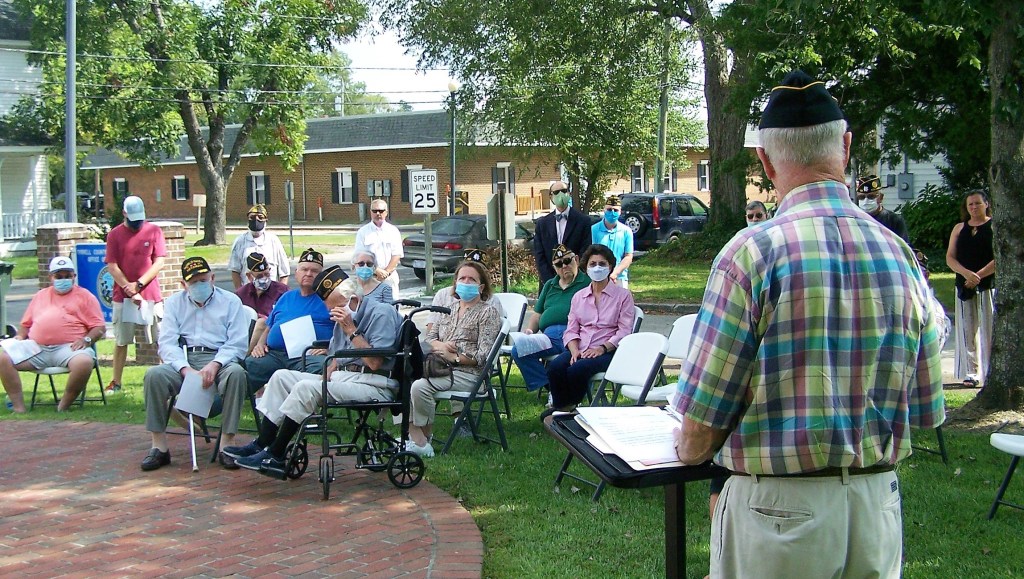 Leroy Spivey, commander of American Legion Post 182 in Columbia, conducted a brief commemoration of the 75th anniversary of the end of World War II at the Veterans Memorial Plaza beside the Tyrrell County Courthouse on Sept. 2. About 30 people attended at the 11 a.m. event. (R. McClees photo)

About 30 people gathered at the Veterans Memorial Plaza beside the Tyrrell County Courthouse on Sept. 2 to commemorate the 75th anniversary of the Japanese surrender that ended World War II.

The event was sponsored jointly by Scuppernong Post 182 of The American Legion and the Glynn T. Cahoon Post 10659 of the Veterans of Foreign Wars.

Walter Davenport, American Legion post chaplain, prayed the invocation, and all in attendance stood and recited the Pledge of Allegiance.

Ray McClees, American Legion post judge advocate, read the words General of the Army Douglas MacArthur spoke before and after the Japanese signing of the Instrument of Surrender aboard USS Missouri in Toyko Bay on Sept. 2, 1945. He also read the general’s brief radio broadcast to the nation shortly after the signing ceremony.

The Rev. C.L. Reynolds, a Korean War era veteran, prayed the benediction to close the program.