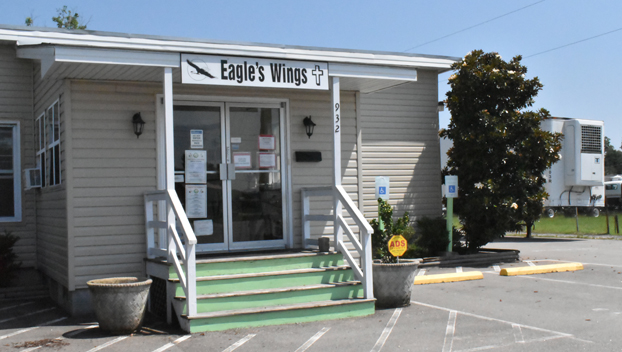 While the lights are back on at Eagle’s Wing Food Pantry after a complete electrical system failure in late August, the nonprofit still faces a tremendous financial need as it prepares to upgrade its capacity to handle the demands of its various appliances.

“We’ve completed phase 1 of the electrical work, which put us back up and running as we were before, but the upgrade is supposed to start Friday,” said Eagle’s Wings Executive Director Ann-Marie Montague. “That is a major capital overhaul of our entire electrical system, and when I say that, it means that it’s a lot of money.”

For the upgrade itself, Montague says the nonprofit will need to raise close to $20,000, plus additional funds to replace a commercial HVAC unit that provides heat to the building. The nonprofit is still awaiting a quote to see how much that unit will cost.

When volunteers arrived at Eagle’s Wings on Aug. 24, after being away for the weekend, they discovered that the entire electrical system had failed, leaving burned wires in the meter box and a smoking HVAC unit on the roof. Montague says appliances and energy demands overloaded the system, which had not been properly upgraded over time due to budgetary constraints and a lack of sound advice on upgrading.

“We are fortunate we didn’t have a fire,” Montague said at the time. “But as bad as this is, it’s not stopping us from doing our food ministry, and our building is still here.”

True to that word, Eagle’s Wings hasn’t missed a beat since the system failure, maintaining its weekly food distributions at its Third Street headquarters. In the grand scheme of things, relatively little food was lost at the time, aside from some dairy and produce products. Most of the frozen food was saved, thanks to the quick delivery of a refrigerated trailer by Groen Enterprises.

So far, Montague says the response from the community to the nonprofit’s need has been exceptional, with churches, individuals and businesses chipping in to help Eagle’s Wings through a tough time. In a year when COVID-19 has forced the nonprofit to cancel most of its traditional fundraisers, the donations coming in now are needed more than ever.

“So far, the community has been wonderful,” Montague said. “For not even knowing how much it is going to be, people know that this is going to be an expensive proposition for us, so we’re seeing a lot of wonderful donations right now. We thank the people who have donated and those who will be sending in donations to help with this cost, because this is a major thing.”

Those interested in donating toward the electrical system upgrade can mail a check to Eagle’s Wings at P.O. Box 426, Washington, NC 27889.