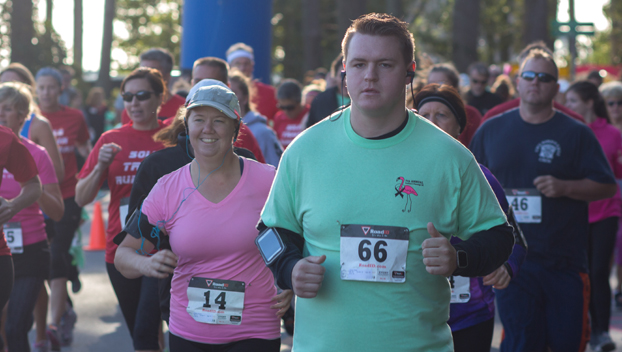 AND THEY’RE OFF: Runners take off from the starting line during a previous Darleen’s Flamingo 5K. (Daily News)

BELHAVEN — For more than a decade, flocks of people in pink T-shirts have filled the roads of the Smithton community every October, raising money for the Shepard Cancer Foundation during the annual Darleen’s Flamingo 5K. That won’t be the case this year, however, as organizers announced last week that the annual foot race will not take place in 2020.

“After a lot of discussion and trying to figure out what the best course of action is, we decided that postponing is what we need to do,” said Nikki Klapp, who organizes the 5K. “It’s been postponed until October of 2021, so we’re just going to take this year off. We didn’t feel like postponing until later in 2020 or even early 2021, because we don’t know where we will be with COVID and everything going on. “

Held in honor of Klapp’s mother, Darleen Smith, the Flamingo 5K has been a steadfast fundraiser for the Marion L. Shepard Cancer Center Foundation. When Smith passed away in 2010 after a five-year battle with breast cancer, her family decided to organize the race in order to a difference in the lives of other cancer patients. This year would have marked the 11th year for the 5K, which Klapp estimates has brought in nearly $175,000 for the foundation over the years.

“We donate to the Shepard Cancer Foundation because the money stays 100% in eastern North Carolina and goes straight to the patients at the Shepard Cancer Center,” Klapp explained. “We like the fact that they support not just the physical aspect, but the emotional aspects as well. They take a holistic approach to wellness. In addition to treating the cancer, they’re offering the reprieve of massages, journaling, art therapy and financial support, as needed.”

While the Flamingo 5K will return in 2021, Klapp still encourages others to support the Shepard Cancer Foundation’s mission. To learn more about how to do so, visit www.vidanthealth.com/Locations/Facilities/Marion-L-Shepard-Cancer-Center or call 252-975-4308.

“We are very appreciative of all the support the Flamingo 5K has gotten over the years,” Klapp said. “We are definitely planning and looking forward to picking this back up in October of next year.”