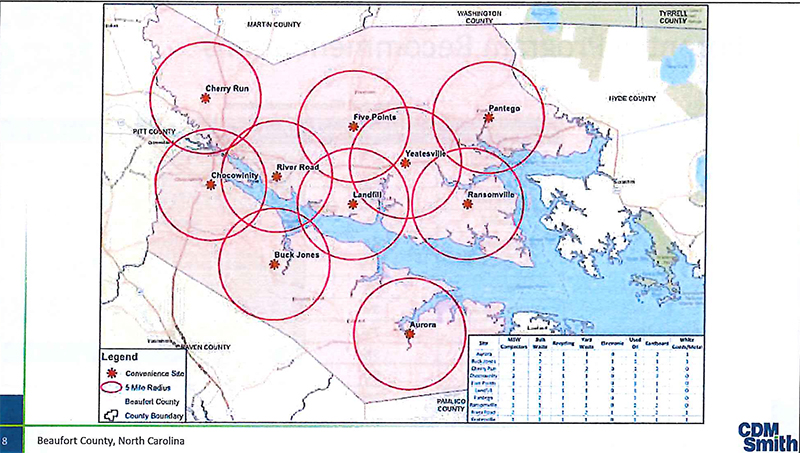 The three sites are: on the south side of the Pamlico River, the Buck Jones site, on Clay Bottom School Road in Chocowinity; on the north side of the river, the River Road site at Yeatesville; and a more central location at the transfer station on Flanders Filters Road in Washington.

There are several requirements attached to disposing of construction debris: no roofing material or fencing is allowed; if debris is not transferred in a vehicle and the customer is using a trailer, only debris on single-axle trailers will be accepted. No contractor, subcontractor or commercial business is permitted to dispose of debris at those sites.

The decision, made by a 5-2 vote at the Beaufort County Board of Commissioners’ September meeting, ended a recent ban on all construction debris at all county sites, regardless of the amount. However, the board will continue to iron out the details about exactly what is allowed, and not allowed, at the sites.

The county has been struggling with the issue of trash for years. Currently, the rate is $165 per year for residential customers — a price driven up as the amount collected, and the cost to haul it away, has increased. The ban on construction debris at county convenience sites was an effort by the county and the contracted Republic Services to cut down on tonnage.

“Either you figure out a way to reduce the amount of tonnage or the cost of that continues to go up,” said Beaufort County Manager Brian Alligood.

Commissioner Hood Richardson advocated for a single site — that of the Flanders Filters transfer station — to accept residents’ construction debris, but that met with resistance because it was not a site convenient for residents living in eastern Beaufort County, representing a 40-to-50-minute drive for some.

“It’s really unfair to require all of our people to take items all the way to Flanders when they’ve got just a few items that they cannot dispose of,” said Commissioner Frankie Waters.

The real issue is that enforcing the directive is difficult, which is how the construction debris tonnage added up to begin with, according to Alligood.

“Historically, our policy — if you look at the messaging the county has — it talks about small amounts. We have been very accommodating over the years. With convenience sites: they’re convenient; we’ve got them all over the place,” Alligood said. “But one 2-by-4 became four 2-by-4s, and that became eight. We had a lot of contractors taking advantage of that. Some folks are going to do the right thing; some folks are never going to do the right thing, unfortunately.”

Decision-making has entered the public domain, as the county’s solid waste committee was disbanded during a solid-waste-committee workshop in August. The board will continue discussing the solid waste issue in regular meetings, and has also given Commissioner Stan Deatherage the go-ahead to look into the prospect of a regional recycling facility.