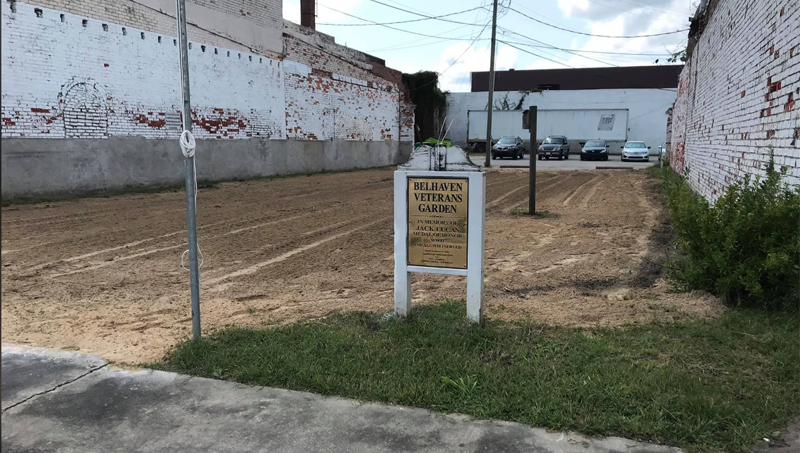 READY TO BUILD: With old concrete and landscaping removed, the lot on Main Street that will soon house a new Veterans Park is ready for construction. (Belhaven Veterans Park)

BELHAVEN — Old concrete and landscaping have been removed from a lot in downtown Belhaven that will soon be home to a new park honoring local veterans. Since July, a group of military moms from the Belhaven area have been raising funds to renovate the park, with a goal of holding a ribbon cutting by Veterans Day on Nov. 11.

“We decided to go a little bigger and took out all of the concrete in there, which we will replace with brick pavers,” said Olivia Hudnell, one of the military moms organizing the renovations. “So now our budget is right at $30,000 where it was originally at $21,000.” 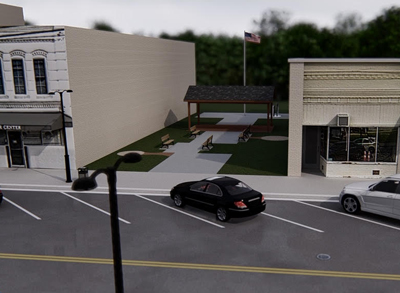 Plans for the site, developed by Slade Landscaping in Bath, show a final product with an outdoor shelter shelter, benches, landscaping and a plaza of brick pavers that will recognize and honor local veterans for their service.

As of this week, the group is right around $10,000 shy of the total $30,000 needed, according to Hudnell. Donations are still being accepted for the project via the Belhaven-Pantego Rotary Club, and bricks can still be purchased in honor of veterans and active-duty service members through Sept. 30.

“It’s been just great,” Hudnell said on Monday. “I just got off the phone with somebody about purchasing a brick. Even people that don’t live here, or who just moved here, everybody seems excited about recognizing our veterans. We’re really grateful, and the businesses are stepping up and donating money, so we’re really pleased.” 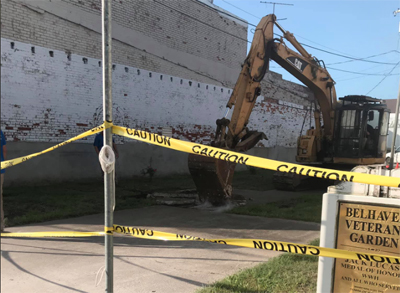 Those wishing to donate to the project may do so by sending a check to the Belhaven-Pantego Rotary Club at 770 W. Main St., Belhaven, 27810. Those interesting in purchasing an engraved brick in honor of a veteran or service member may do so by filling out an order form that can be found here. For more information about purchasing a brick or making a donation, call Hudnell at 252-943-7829.