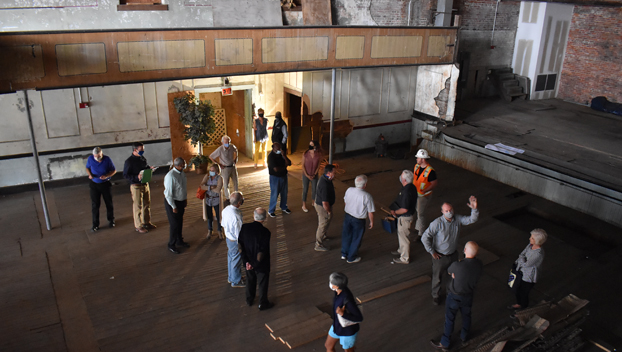 PROGRESS REPORT: Donors, board members, supporters and local dignitaries had the opportunity to tour the Turnage Theatre’s historic vaudeville theater this week to view the repairs to the circa-1913 building’s roof. (Matt Debnam/Daily News)

Arts of the Pamlico employees, board members and friends of the Turnage Theatre marked a momentous milestone this week, as repairs on the circa-1913 building’s roof were officially completed.

Over the course of the past year and a half, AOP has undertaken an aggressive fundraising campaign to address critical structural needs for the roof, which was in immanent danger of failing. From $5 community donations to a $714,000 USDA Community Facilities Grant, and everything in between, the nonprofit was able to raise the vast majority of the $1.4 million needed for the project, leaving $140,000 still needed to pay off the remaining balance for the repairs.

“This was a milestone that we have been envisioning since 2017, and I know that many others before us envisioned the same thing,” said AOP Executive Director Debra Torrence.

In addition to preventing water intrusion throughout the building, the repairs are also the first step in possible renovations of the historic vaudeville theater on the third floor of the Turnage. According to project engineer Curtis McLawhorn, of McLawhorn Engineering, a National Park Service Grant in the works could help pay for more repairs down the line, including exterior masonry restoration and interior structural restorations. 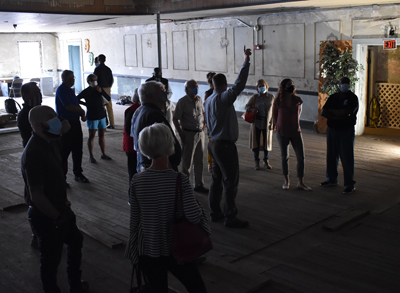 FINER POINTS: Project engineer Curtis McLawhorn points out some of the finer details of the roof renovations at the Turnage Theatre. (Matt Debnam/Daily News)

“It’s very exciting to see this space dry and viable, and ready for next steps to restore one of the last, largely intact, vaudeville theaters in the nation,” Torrence said.

While McLawhorn has handled the engineering aspect of the roof project, T.A. Loving served as the contractors for the job. Piece-by-piece, foot-by foot, the company’s crews removed and replaced the old roof over the course of spring and summer.

“A lot of people don’t understand the work that went on to actually replace the roof and what these guys had to go through,” said TA Loving project manager Mark Beach. “We had to take the roof off two feet on either side of the trusses to take them out and then take out pieces of the roof between each truss. We also had to make sure we could put a temporary dry cover down in case the rain came. These guys had a stressful day everyday, and I think they did a wonderful job.” 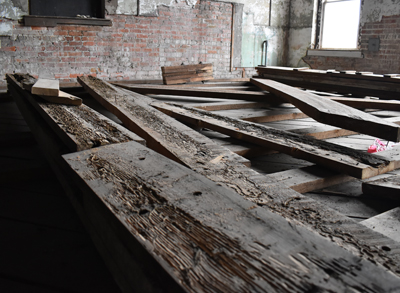 OUT WITH THE OLD: Original roof trusses removed during repairs showed signs of termite and water damage. If left unaddressed, roof failure would have been a real possibility at the Turnage. (Matt Debnam/Daily News)

“This roof was failing in place,” Torrence added. “Had we waited much longer, it would have been down on the first floor.”

Without the support of the broader community, that might have been the case. For both Torrence, and AOP Board Chair Roland Wyman, the repairs represent more than another project completed — they’re the latest in a long line of efforts to protect and preserve the historic property.

“It’s important to recognize that there have been people dedicated to this historic property for decades,” Wyman said. “We need to recognize them as the people who helped preserve this property, which ultimately led to this latest project — the complete rebuilding of our roof. This was this year’s major project.” 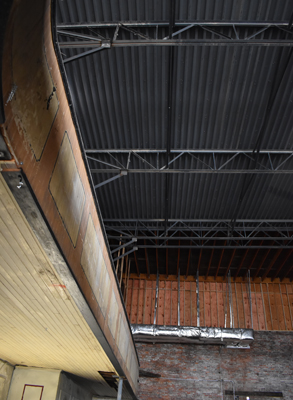 BUILT TO LAST: The result of a major fundraising effort over the past three years, the Turnage Theatre’s new roof will last for generations to come. (Matt Debnam/Daily News)

As to the remainder of $140,000, AOP is still accepting donations from the community to help meet that need, which will prevent the nonprofit from having to take out a line of credit to pay off the work. On behalf of the staff and the board of directors, Torrence and Wyman both expressed their gratitude for the support shown so far.

“From my end of it, I can’t overstate my appreciation for the community’s support,” Wyman said. “Our region and our state are true supporters of the arts.”

“The community has been incredibly supportive,” Torrence added. “We’ve had donations from $5 on up, and every penny counts. We’ve been working away at this for three years and building on the shoulders of many people to protect this historic jewel.”

While Arts of the Pamlico is still waiting for Phase III of the statewide reopening plan to take effect before welcoming back the public, Torrence says there are a number of new events and exhibits in the works, including a Fine Arts show tentatively scheduled for late October or early November.

Those wishing to learn more about the Raise the Roof project, or who want to donate toward the remainder of that $140,000 goal, may do so at www.artsofthepamlico.org/raise-the-roof.