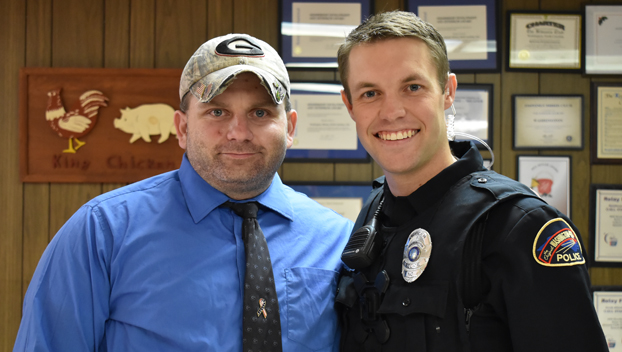 THANK YOU: U.S. Army Sgt. Brandon Glass bought a meal Friday in appreciation for Washington Police Department Officer William Cyrus, as well as other WPD officers and Beaufort County Sheriff’s Office deputies on the same shift. Glass credits Cyrus with saving his life when he was contemplating suicide on the anniversary of the deaths of two of his brothers in arms in Afghanistan. (Matt Debnam/Daily News)

Earlier this year, U.S. Army Sgt. Brandon Glass found himself in a bad place. On the 10th anniversary of losing two brothers in arms to a roadside bomb in Afghanistan, he found himself confronting that memory and its pain. Ultimately, he began contemplating suicide, and credits Washington Police Department Officer William Cyrus for helping him work through that situation.

Last Friday, Glass had the opportunity to return the favor, buying dinner at King Chicken for Cyrus, the other members of his shift and deputies from the Beaufort County Sheriff’s Office. 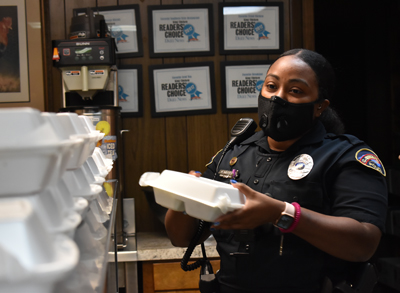 “It’s called, ‘I got your six,’” Glass explained. “If you see an officer, thank them and have their back. When that 911 call comes through, I can guarantee you they’re going to roll out and get to you as quickly as possible.”

“It means a lot to me that he’s offering to buy dinner for us,” Cyrus said. “I wasn’t expecting this at all.”

Glass served in Iraq from 2006 to 2007, where he was injured by an improvised explosive device. During his next tour of duty in Afghanistan, from 2009 to 2010, he served as an explosives engineer, sweeping the countryside to protect soldiers and civilians from similar devices. It was during that tour that he lost two close friends, Sgt. David A. Holmes and Sgt. 1st Class Edgar Roberts, also to an IED.

“An 800-pound explosion ended up flipping my 27,000-pound truck like it was nothing,” Glass said. “It instantly killed my gunner. My platoon sergeant lasted two months and three weeks here in the states before succumbing to his injuries 10 years ago, this August.”

The post-traumatic stress of those events, coupled with the significant anniversary, in turn brought about an emergency situation. With Glass contemplating suicide, the WPD intervened in the most down-to-earth way possible — Cyrus simply talked to him; not just for a few minutes, but for a full two hours before he had to take another call, then leaving his personal cell number for Glass.

“I wanted to help him,” Cyrus said. “Me being a police officer had nothing to do with that. That’s how I was raised — if I see somebody in need, I’m going to help them. The relationships you build with people are important. At the end of the day, I want to make sure I’ve impacted at least one person throughout the day of working.” 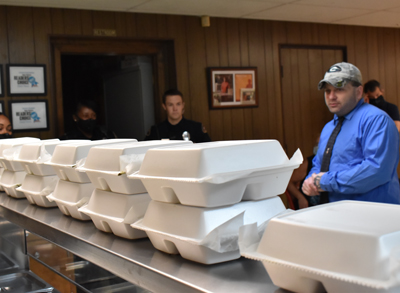 HAVE AT IT: Meals prepared by King Chicken, along with gifts donated by other local businesses, awaited officers at the restaurant on Friday evening.

For other veterans who may be dealing with PTSD, who might need help, Glass has one important recommendation — reach out to someone to help you get through the hard times.

“I believe 22 veterans every day are taking their lives — every day,” Glass said. “To reach out and receive help is extremely hard to do. But then you get someone like Officer Cyrus, who took almost two hours before he needed to go to another call to personally talk me down. He gave me his personal cell phone number and showed me that he had a heart and not just a badge. I credit him with keeping me here right now talking with you.”

For veterans who find themselves struggling with PTSD or in need of immediate assistance from someone who understands, the Veterans Crisis Line is available 24/7 at 1-800-273-8255 and press option 1 immediately. Glass says looking out for friends who served, and even a simple “Thank you,” can go a long way.

“Let them know they are loved,” Glass said. “They love this country and obviously did their service for you. Why not give something back in return?”