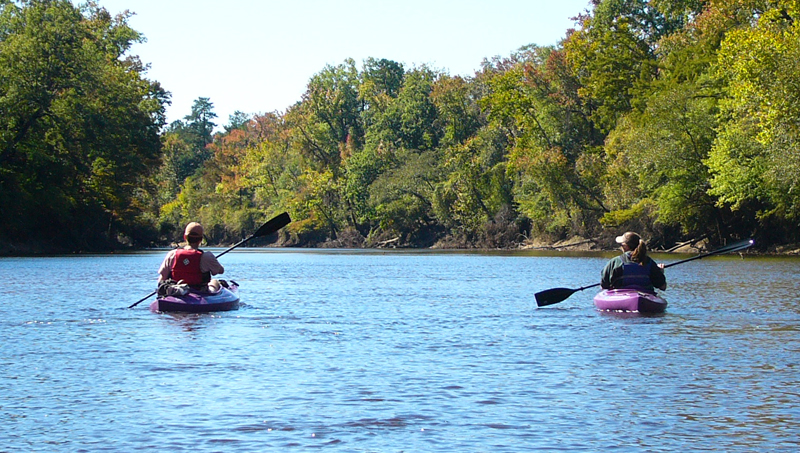 Ten days, two kayaks and one river — those are the makings of an excellent adventure that starts Thursday for two local adventurers.

Jill Howell, Pamlico-Tar riverkeeper, and Clay Barber, Sound Rivers’ environmental projects coordinator, will embark on a 10-day kayak trip down the Tar River, starting in Oxford and ending in Washington.

“For most of the nights, we’re going to be able to stay at the Sound Rivers’ camping platforms. Then we’ll spend one night at the tiny houses at The Mills in Rocky Mount, and a couple of nights of camping on the river banks. We’re going to have to figure that out on the fly,” Howell said.

The pair will be broadcasting twice a day via Facebook Live, so the public can follow along from the rock-studded hills and cliffs surrounding a narrow Tar River in Granville County and the Class II rapids of Rocky Mount to the placid waters meandering by Tarboro and Greenville and the final destination of Washington. As part of the Tour de Tar, they’ll also be posting photos, videos and recorded visits with experts on the river’s ecology and health.

For Howell and Barber, the adventure is part exploration of the Tar-Pamlico Water Trail and part education, not only for those following along through social media, but for themselves and their roles at the nonprofit that serves as an environmental advocate for eastern North Carolina waterways.

“We planned it back in March. (Sound Rivers’ Executive Director Heather Deck) encouraged us to take some time and paddle the whole river. Both of us were kind of new to Sound Rivers — we both came on last year,” Howell said. “We’ve never seen a lot of stretches of the river, so we’re both going in a little blind, but we’re both willing to adapt and know there’s going to be a bit of uncertainty.”

“I want to get a good feel for the whole river because it’s much different geography from where we’re launching to where we’re pulling out in Washington,” Barber said.

Barber, who has previously guided tours for Knee Deep Adventures in Greenville, also has a background in sustainable tourism and he sees the trip is an opportunity to highlight the towns along the Tar and share his experiences on where to stay and what to do when planning a river adventure.

“Oxford, Louisburg, Rocky Mount, Tarboro, Greenville and Washington — all these places are really lucky to have the Tar River in their backyard,” Barber said. “It’ll be really cool for us, paddling through those places, but the beauty of it is, you can put in at any of those towns. You don’t have to do an epic journey like we’re doing to take advantage of the camping platforms.”

Fourteen camping platforms, from Franklinton to Goose Creek State Park, provide overnight access to the Tar-Pamlico River for canoers, kayakers and recreational boaters. As manager of the Water Trail, Barber will be inspecting the platforms for any repairs they may need as they make the journey downriver.

While a few meals will be provided along the way — some Sound Rivers members have volunteered to leave coolers with food at strategic points, and Howell and Barber will be able to make stops for hot meals in Rocky Mount and Tarboro — the real challenge so far has been packing enough food and water for the trip.

“Planning water for 10 days in a single kayak is a challenge in and of itself,” Barber said. “We’re going to have to have a plan to nourish ourselves, so we can do these 16-mile paddle days.”

“We’ve had to be very intentional about what we’re taking,” Howell said.

The end goal is to traverse the rapids and the flat calm, document the natural beauty, as well as point out some of the water-quality threats along the river and what Sound Rivers is doing to try to address them, according to Howell.

At journey’s end, however, it will have been the adventure of a lifetime.

“We’re calling it the ‘Tour de Tar’ but we’ve also started calling it ‘Jill and Clay’s Excellent Adventure,’” Howell laughed. “It really will be an adventure, and I’m really looking forward to it.”

“We’re hoping to inspire people to get out on the river,” Barber said. “But it will be one for my personal history books.”