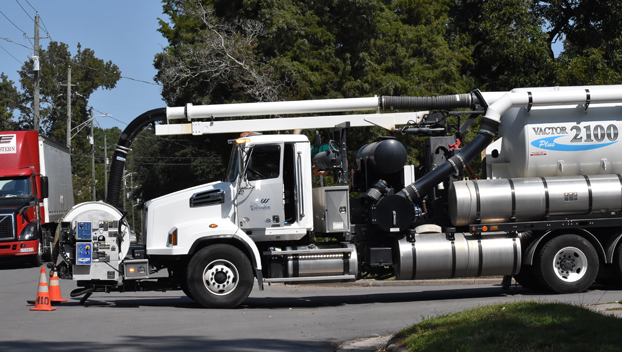 A ruptured sewer line in Washington spilled approximately 50,000 gallons of untreated wastewater into Jacks Creek on Tuesday, according to a press release from the city.

Washington Public Works staff worked Tuesday afternoon to contain the spill, which was located between Respess and Market streets. According to the press release, the spill was contained in about two hours.

“It was a cast-iron line that’s pressurized and cracked,” said Washington City Manager Jonathan Russell. “We notified the North Carolina Department of Environmental and Natural Resources and then deployed some preventative measures to recapture most of the spill.” 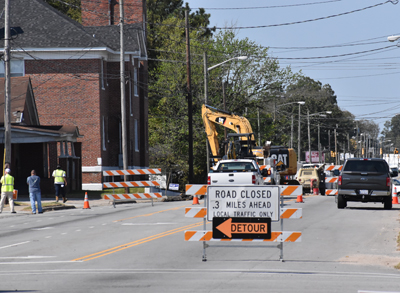 SCHEDULED REPAIRS: The sewage leak coincided with scheduled repairs of a collection basin near one of the city’s lift stations. City Manager Jonathan Russell said it is unclear if the maintenance and the leak were related or coincidental. (Matt Debnam/Daily News)

Russell said the spill Tuesday coincided with scheduled repairs to a catch basin connected to a lift station in the heart of town. Those repairs closed down Fifth Street for part of the day, and the city is working to determine if the spill and the repairs were related.

While the sewage spill was contained early Tuesday afternoon, the repairs that closed Fifth Street were completed later that afternoon.

David May, who serves as the water quality regional operations supervisor with North Carolina Department of Environmental Quality, agrees with that assessment, saying city staff responded quickly to address the spill. Due to those efforts, he says it does not appear any of the sewage reached the Pamlico River. While there will be impacts on the creek in the short term, May said natural processes should help absorb any remaining sewage.

May said fishing in Jacks Creek, a popular activity for many area residents, is not advised at this time. DEQ will continue to monitor water quality in the creek in the days and weeks to come.