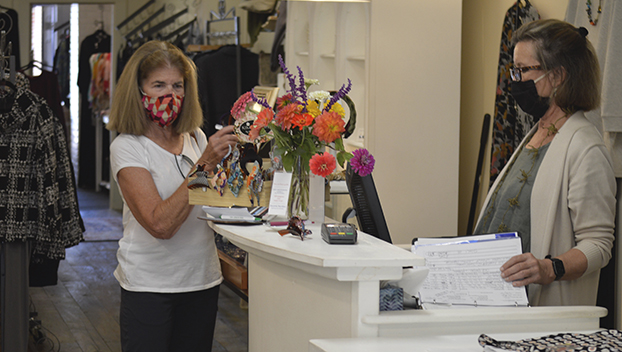 The early bird catches the worm, or the old saying goes. In this case, the early walker seized a business opportunity.

Bunny Wayt likes to get up early and go for a walk with Rebel, her Labrador retriever. One late spring morning around 6 a.m., as the sun was rising, she ran into two friends on the Washington waterfront boardwalk who were lamenting the fact that The Secret Garden Gallery and Boutique was for sale and probably closing forever.

Wayt and Rebel made a quick detour down Main Street, dodging construction debris from the streetscape project, over to the shop tucked between the Harbor District Market and the Turnage Theatre to confirm what she had heard.

“Sure enough, there was a sign in the window saying the owners were retiring and the business was indeed for sale,” Wayt said. “I called Barbara (Hardy), and three months later, I was a business owner.”

That’s the short version. There were multiple conversations between Wayt, Hardy and her husband, co-owner Bob Ray, bankers, financial advisers and others before the deal was finally closed on Sept. 2.

“Barbara and Bob have been very supportive through the whole process,” Wayt said. “They had a shop on Ocracoke by the same name and started this location in 2017. We just clicked at our first meeting, and it’s worked out great so far.”

Wayt grew up in Raleigh and graduated from University of North Carolina-Chapel Hill with a major in art. She managed a boutique while in school, then took a career path that led her through several positions in the clothing and apparel industry in New York, Florida and other locations in the southeast.

She moved to Washington Park in 2010 to be closer to family, then went back to Florida in 2014 before moving to Pine Knoll Shores, and back to Washington in 2017 to work as a wholesale buyer for men’s clothing with a territory that covered several southeastern states.

“I was driving well over 30,000 miles a year and living out of hotels until the pandemic hit,” Wayt said. “I realized it was time for a change, then this opportunity came up. I feel like all the experience I’ve gained in retail, wholesale, manufacturing and as a buyer will be put to good use at The Secret Garden.”

There are no plans to change the name and current popular brands will still be in stock. There will be new lines introduced as spring comes and fashion trends change.

“Barb and Bob had a good thing going here, and I want that to continue,” Wayt said. “The regular customers know they can find what they like here, and I’ll be mixing in some new things to help bring more people in. The customers I’ve met are relieved that the shop is open again, and I’m happy to share what I have planned for the future.”

Like most Main Street proprietors, Wayt will be glad to see the streetscape project wrap up and COVID-19 get under control. She is bullish on Washington’s future and is looking forward to seeing her business grow.

“I believe in our town,” she said. “The streetscape is going to be fabulous when it’s done. There are new restaurants on the way and the new Moss Landing development will help bring more people closer to downtown. People like to shop local, and I’m planning on giving them every opportunity to do so.”

Not so coincidentally, a newcomer to the area found the perfect dress on a sunny mid-week afternoon with Wayt’s personal service touch.

“I shopped here before Barbara decided to close,” Francis Hogan said. “I’m glad Bunny is here, and my dress is a brand that wasn’t carried here before. I’ll be back again.”