Bam gives back to hometown 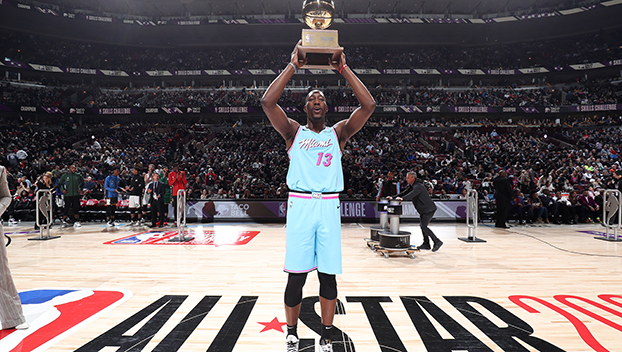 Bam Adebayo is a little busy these days, but he still found a way to have an impact on his old stomping grounds.

While helping his teammates battle LeBron James and the Los Angeles Lakers in the NBA finals, the 6-foot, 9-inch Miami Heat center and former Northside High School standout donated backpacks to his old school and others throughout the Beaufort County school system.

A representative of the BAM Foundation delivered the backpacks to Northside and to Bright Futures in Washington for distribution to area students.

“They are awesome backpacks,” said Ashley Padgett, director of student services for Beaufort County Schools. “They are very sturdy and have perfect pockets so the kids can carry their Chromebooks and water bottles. Nike sent them in off-white and black, basically unisex colors, so the kids could have a choice. We are very grateful to the BAM Foundation for this donation.”

Since all BCS students are learning remotely until later this month, Padgett said distribution is a little different than normal. Bright Futures Beaufort County, in conjunction with the Washington-Beaufort County Chamber of Commerce, assists local students whose families have specific needs that can be met quickly. 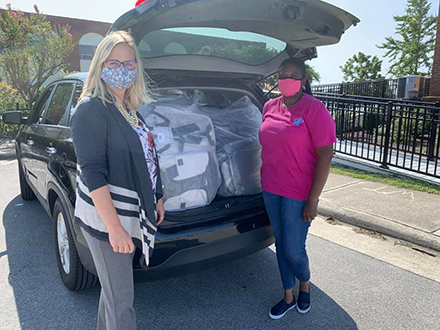 “The first set of backpacks went to families housing foster children and to homeless families,” said Padgett. “We felt like they needed them the most, and we filled them with supplies that local churches helped collect. They are a little bigger than some backpacks, so that helps us give them to middle and high school students, who sometimes are overlooked in favor of the younger kids. They are very handy for a variety of uses, including carrying some sports equipment back and forth from practice.”

Adebayo moved to Pinetown from Newark, New Jersey, when he was 7 years old, as his mother wanted a safer environment and to be closer to her family. He attended Northeast Elementary School through eighth grade, then went to Northside until his senior year. He graduated from High Point Christian Academy in 2016, where he earned McDonald’s All-American honors. He spent one year at the University of Kentucky before the Heat chose him with the 14th-overall pick in the 2017 NBA draft.

“I’ve known him from middle school on,” said current Northside girls basketball coach Michelle Leathers. “He was 6 foot, 4 inches, in eighth grade, and I’ve watched him get bigger. I remember one time early in the school year, I needed somebody to hang my clock on my classroom wall. Bam was the only one tall enough to reach it without a ladder, and he was happy to do it for me.”

Adebayo’s third NBA season has been his best one, as he averaged 16 points and 10 rebounds during the COVID-19-interrupted regular season, then added 15 points and seven rebounds a game in the playoffs. He missed the second and third game against the Lakers with shoulder and neck injuries but returned for the fourth game Wednesday night. The Heat trailed Lakers 3-1 in the series when the Daily News went to press.

“I’m not surprised at all where he is now,” Leathers said. “I think it’s very inspiring for our kids to see somebody who is from here make it all the way to the NBA finals. Bam comes back when he can and hasn’t forgotten where he came from. He invested the time, put in the hard work and gave great effort to improve. He is a great role model. We’re all proud of him.”