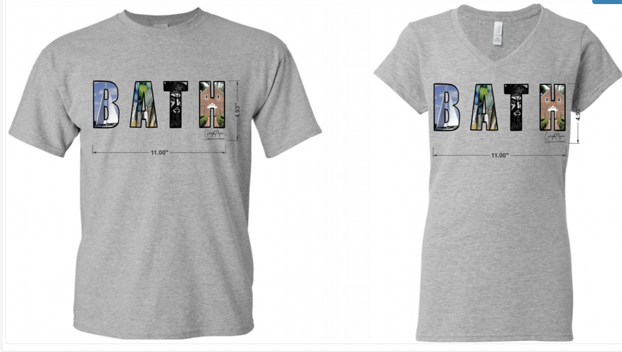 BEAUTIFUL BATH: Arts of the Pamlico Director Debra Torrence has hinted that Bath is not the only Beaufort County town that will receive recognition through one of the theatre’s signature arTshirts. The latest tee design, recognizing North Carolina’s oldest town, is seen here. (Arts of the Pamlico)

There are two more “arTshirts” available for fans of the Turnage Theatre — and another one on the way — courtesy of an East Carolina University graphic arts major who recently finished an internship at the storied cultural center. Arts of the Pamlico Director Debra Torrence said one of the reasons she encouraged 20-year-old Carleigh Flynn to work on the designs is that one of the theater’s goals is to support local and young artists in developing their portfolio and crafts.

“People have been asking for more T-shirts — which we have renamed ‘arTshirts’ — and we are actually encouraging our artist members to submit designs,” Torrence said.

Artists whose submissions are chosen will be paid a stipend and get their names on the T-shirts that showcase their work.

“I love the Turnage.” Flynn said. “I told Ms. Torrence that if needs anything from me or has an idea, I’m still interested in doing things for the theatre.” 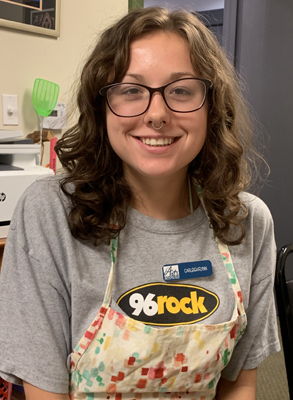 ACCOMPLISHED ARTIST: Former ECU intern Carleigh Flynn has designed two of the three new arTshirts to be featured for sale at the Turnage Theatre and at Coffee Arts (the Old Swindells store) in Bath. (Arts of the Pamlico)

Flynn’s internship spanned the summer of 2019, between her freshman and sophomore years at ECU. Now working as a graphic designer for the ECU Recreation and Wellness department, Flynn said the fact that her designs are going to help raise funds for the theater gives her a sense of satisfaction, especially since she was sad to leave when her internship was finished.

Flynn created two of the theatre’s three new clothing offerings: the blue-on-blue arTshirt featuring the Turnage marquis currently being released, and one specifically featuring the town of Bath which will arrive in about one months. 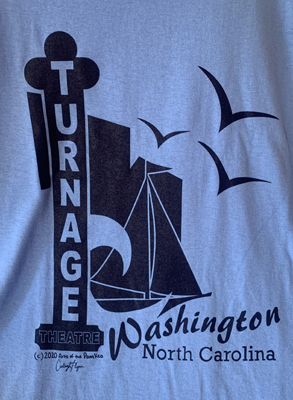 BLUE ON BLUE: The iconic Turnage Theatre is celebrated on this “blue jeans appoporiate” design by former theatre intern Carleigh Flynn. (Arts of the Pamlico)

A third arTshirt, designed by local high school sudent Kayla Lilley, is already available, emblazoned with the words “Greetings From Washington” and featuring line drawings of its attractions within the letters themselves. Flynn said that earlier arTshirt helped to inspire her while she was working on her own designs.

Each shirt costs $20, with $2 added for shipping requests. They are available at the theatre’s Art Cafe from 10 a.m. to 3 p.m. on Thursdays, Fridays and Saturdays, as well as in Bath at Coffee Arts in the old Swindells store.

Torrence said she is looking into other possible locations for the theatre’s arTshirts and welcomes submissions for future designs from motivated artist members of Arts of the Pamlico.

Total confirmed cases of COVID-19 in Beaufort County numbered 1,284 Thursday. There are now 188 active cases in the county,... read more