Knights Season Over After First Round Loss 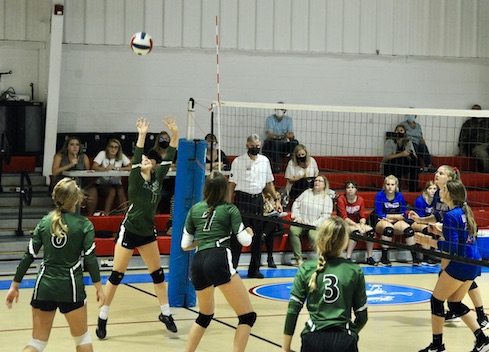 The season in any sport always ends abruptly when tournaments are involved, unless yours is the last team standing.

The Terra Ceia Christian School varsity volleyball team qualified for the North Carolina Independent Schools Athletic Association 1A state tournament for the first time since 2006, but the journey ended after one match, a 3-0 defeat to The Albemarle School Tuesday night in Elizabeth City.

It was the third meeting between the Tar Heel Independent Conference rivals, with the Colts winning all three. The Knights were competitive in every set Tuesday, but fell 25-21, 25-17 and 25-16.

“It was the best of our three matches against them and we gave it all we had,” said coach Jamie Van Essendelft, whose team finished 5-7. “Albemarle really brought their game and played better at the net than we did. We would fall six or seven points behind, then battle back, but we couldn’t recover from errors. We led a couple of sets at the mid-way point but couldn’t hang on.”

The Colts were the TIC regular season and tournament runner-up and will travel to Belhaven to take on league foe and second-seeded Pungo Christian Academy (13-0) Friday. Albemarle (10-4) is the only team to win a set against the Raiders this season.

Meanwhile, the Knights concluded one of their more successful seasons in returning to the state tournament for the first time in 14 years.

“Making the tournament caught us off-guard a little bit,” Van Essendelft said. “We thought our season was over after we lost in our league tourney semi-finals. We were surprised and excited, then really almost stunned when I told the team how long it had been since our school competed. That made them feel a little better about going through all the extra stuff they had to do to get to this point.”

The extra stuff included patience in adapting to the NCISAA-mandated COVID-19 restrictions that were implemented for fall sports. Like the other schools, the Knights had to come dressed for practices and games without using the locker room, submitting to daily temperature checks, sanitizing the game and practice balls, trying their best to stay six feet apart and wearing masks when they couldn’t.

“It was tedious and time-consuming, but necessary,” Van Essendelft said. “It tried their patience, but at the same time, they were grateful to be playing, so they knew the protocols were necessary. It was difficult for them to adapt to playing without their friends and classmates there to cheer them on, but they knew it was better than not playing at all. It helped that their families were allowed to watch later in the season.”

The Knights return six of their eight players, losing seniors Ruthie Askew and Kaia Van Essendelft, setting the stage for another successful era of Knights volleyball.

“it’s always hard to see the seniors move on, but it will be a little more difficult without my daughter around,” Van Essendelft said. “This was a very close group and I think that’s what helped them be successful. The last set against Albemarle, they were all encouraging each other to do their best because it might be their last time together. They are friends off the court and that helps them mesh well on the court. We have some good players coming next year, so we hope to continue a new string of state tournament appearances.”