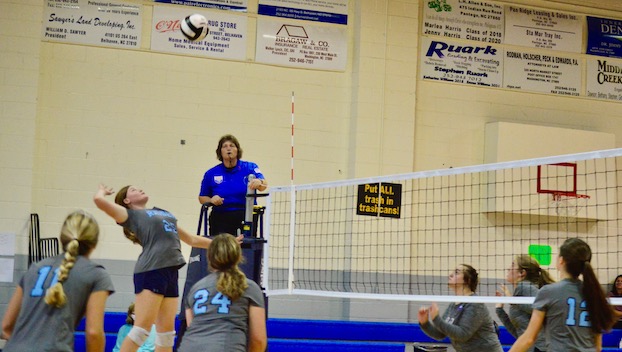 Every time Pungo Christian Academy sophomore Reagan Stoop steps on her home floor, she thinks about family. It’s hard not to since she’s walking onto to Hank Stoop Court.Seventy-two-year-old Hank Stoop is Reagan’s grandfather’s brother, making him her great-uncle. He is the winningest coach in school history,with multiple conference titles in varsity girls and boys basketball and baseball.His girls basketball team won a state championship and several other of his teams finished second. Stoop served as PCA’s athletic director,later as the headmasterand still helps out with the middle school girls basketball team. The school showed its gratitudeby naming the floor for him a few years ago.In short, there’s a lot to live up to, but he’s still Uncle Hank.“He lives about two miles from us,right next door to my grandpa, so I see him all the time,” Stoopsaid. “I think it’s really impressive that he has hisname on the court,and it motivates me to do my best to make him proud. He’s always encouraged me to play sports and helps me get better.”Stoop’s dad, Chad, played multiple sports at PCA and pitched for the Barton College baseball team in Wilson. Her mom, Leigh,grew up in Virginiaand did the same for the Meredith College softball team in Raleigh. It’s not a surprise that Stoop pitches for the Raiders when she’s not playing first base or in the outfield.She also plays basketball at PCA.
“My dad put me on a 6-year-old tee-ball softball team when I was four,” Stoop said. “He tells me that he wasn’t sure I was ready because one day we were playing catch in the yard,and he threw the ball and almost hit me in the face because I didn’t know to move the glove. I guess I learned quickly,because I caught it.”The 15-year-old is doing just fine in carrying on the family tradition of success in sports. She’s been on the varsity softball team since 7th grade and made the volleyball 1A All-State team last year as a freshman. She added her second Tar Heel Independent Conference VolleyballPlayer of the Year award last week and is primed for another All-State selection.“I give my teammates the credit, including the seniors who graduated from last year’s team,” Stoop said. “I was surprised to make varsity as a freshman and didn’t know how I would fit in. They could have made me an outcast, but they were very welcoming and encouraging, which gave me confidence to settle down and play. I already knew this year’ssenior group from last year,and they’ve been great,as well. I’m a lot more comfortablebecause of them,and they are great leaders for us, so I don’t have to worry aboutthat.”Emma Williams, Riley Cutler and Lauren Ricks lead a Raiders squad that is 13-0 and the No.2seed in the East bracket of this year’sstate tournament. PCA made it to the third round the past two years and has only lost one set so far this year.“Emma is an awesome setter and puts the ball right where I want it,” said Stoops, an outside hitter who uses her 5-foot-10-inchheight to get above the ball and slam it down for the kill. Riley plays really well on the back row and also sets, and Lauren is a good outside hitter and very encouraging. Our whole team plays well together,and it’s been a lot of fun.”Stoop refines her skills at home most nights after practice, often with her eighth-grade sister,Anna. Younger brother Sid, who is in fifthgrade,isusually aroundbut leaves the sisters to their business. Their father constructed a board to prop up beside the house so thegirls can practice kills by slamming the ball into it and work on their returnswhen the ball comes back at them.“Her power has improved a lot since last year and even over the course of this season,” said second-year coach Melanie Eddleman. “Her mechanics and her jump serve have improved as well. She’s a relentless worker—very humble and totally about the team. I am looking forward to watching her continue to improve.”
You Might Like

Knights Season Over After First Round Loss

By Steve Barnes The season in any sport always ends abruptly when tournaments are involved, unless yours is the... read more