Town of Columbia looking ahead to 2021 Ghost Walk 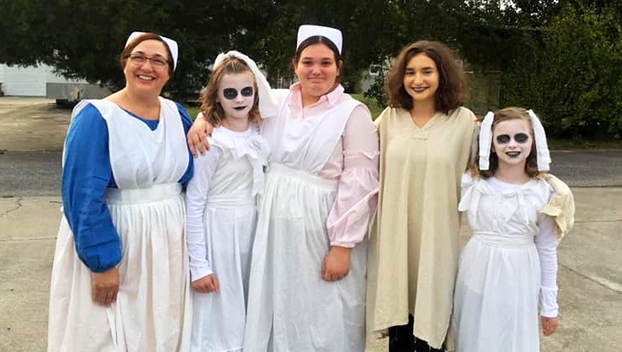 Nurses, the sick and the dearly departed, gather outside the Columbia Christian Church. The church was crucial during the sudden Influenza Epidemic of 1918.  (C. Maready photos)

The Town of Columbia held their first historic Ghost Walk in October of 2019 and plans for it to be a biennial event.

For one weekend only, participants were escorted from the Tyrrell County Visitor Center parking area by knowledgeable guides to eight locations that were significant to the town’s history and lore.

Columbia’s Ghost Walk differed from other walks by the theatrical way it was portrayed. Stories of the past came to life as costumed characters regaled and lamented mysteries, tragedies and significant contributions made by some of its long-forgotten citizens.

“Thoughts for a “Ghost Walk” had been lingering for some time.  Other towns have similar activities and our history is just as interesting — shipwreck, railroad, 1918 Influenza pandemic, graves under the pulpit, jail break, etc. We appreciate George picking up the idea and carrying it forward,” commented Rhett White, Columbia Town Manager. Haislip met with White, and David Clegg, County Manager to discuss the feasibility and share ideas.  After being given their blessings, Haislip moved forward and began planning.

Researchers and script writers from the Tyrrell County Public Library and other individual volunteers, began the task of collecting and compiling facts and stories back in January of 2019. Locations were examined and costumes based on the time-period of the events were put into production. Vintage clothing sources were also used to make the characters as true to life as possible.

One of the last pieces of the puzzle, and possibly the largest undertaking, was to find volunteers to play the leading and supporting roles for each location. This was no easy task for such a small community. It took no less than 30 people to fill the roles, and most were quite new to performing. Volunteers were also needed to set up lighting equipment, to run sound equipment, to help with ticket sales and to guide tours. Altogether, about 45 people were involved with the production, many behind the scenes.

Kim Wheeler, Director of the Red Wolf Coalition, assisted with marketing, ticket sales and sponsorships, and was pleased with the turn out. “The first ghost walk was a resounding success. Many locals commented they learned a bit of history they had not known about Columbia.” Around 200 tickets were sold for the two-night event, with proceeds going to the Tyrrell County Genealogy and Historical Society, event hosts.

As for the future, Haislip hopes this will become at least an every-other-year event. “Next year’s event will emulate the 2019 Ghost Walk in form, but with new stories about the Tuscarora Indian War, Fort Landing’s Colonel Edward Buncombe, and Hezekiah Spruill, to name a few.”  There is also the possibility the event will expand into more than one weekend within the month of October, if participation and community support continue.