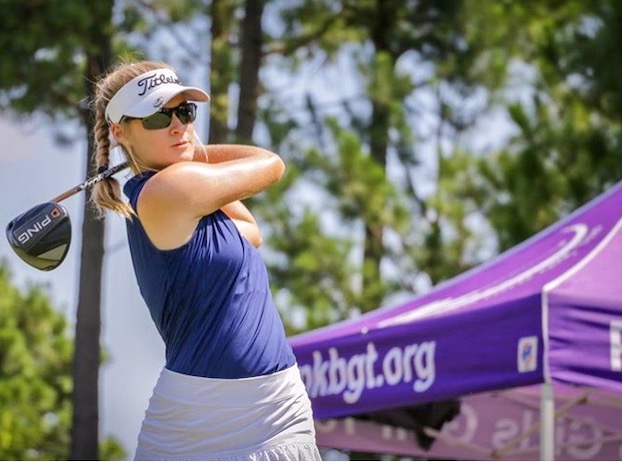 Warren shot a one over par 73, to finish behind sophomore Alexsandra Lapple of The O’Neal School of Southern Pines. It was Warren’s first time competing in the girls state tournament since PCA didn’t have a team until this fall.

“I talked to her about putting one together back in March before COVID shut us down, Raiders athletic director Logan Van Staalduinen said. “I wanted it for her since I knew she had a great chance of doing well in the state tournament and I knew it would be good for our school.”

Warren recruited fellow senior Kayla Tran, who had not played a sport at PCA before, junior Cora Blaine Noble and freshman Jenny Grace Pugh, who played volleyball in previous falls. The team had four matches and Van Staalduinen thinks it turned out well for all involved.

“Grayson has great will power and I knew she would get it done,” he said. “The other girls got out of their comfort zone and enjoyed learning a new sport. I don’t think there are many high schools in the area with girls golf teams, so maybe this will help attract new students. We only need two more for a team next year, so hopefully it will keep going.”

Warren started yesterday’s tournament with a par on the 10th hole, then put together back to back birdies. She was at even par 36 after nine, but since there is no leaderboard to follow, she had no idea where she stood.

“I knew going in that I would have to shoot in the red numbers (under par) to have a chance to win,” Warren said. You are supposed to compete against the course, not the other players, so I was happy with my game at the halfway point.”

Warren started her back nine with three pars, then birdied the fourth and sixth hole to get in the red numbers at one under par.

“Both were par 5’s and I got there in two (shots),” Warren said. “I got up and down for birdie on both and was feeling really good.”

Then came the deceptively difficult 310 yard par four 7th hole. “It’s downhill and there’s water in front of the green, so you have to lay up,” Warren said. “I sort of chunked my second shot and it got stuck in the bank just across the water. I did get my third shot on the green, but three-putted to take a triple (bogey) for a 7.”

Warren pulled it together with consecutive pars to finish at one over 73.

Meanwhile, Lapple, who was playing behind Warren, staggered down the stretch with a double bogey on 7, then made a tournament saving putt for bogey on the last hole to avoid a three way playoff.

“I was disappointed about coming so close, but overall I’m pleased with my round and it was really fun to compete with the other girls,” Warren said. I had 17 good holes and tried my best.”

Warren has verbally committed to play at ECU and will officially sign with the Pirates next month.

“They were the only school I really considered and when they wanted me, I was in,” Warren said. “I’ve always loved going to Pirate football games and I wanted to stay close to home. Golf can be a lonely sport and I’m looking forward to playing for my teammates. I’m proud that we could have a team at PCA this fall, and it was a lot of fun to be part of something bigger than just me.”