Zeta remnants make for a blustery ENC on Thursday 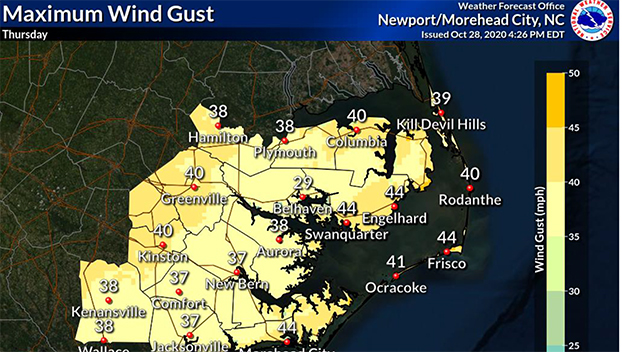 Beaufort County residents should prepare for a blustery day Thursday into Friday morning, as the remnants of Hurricane Zeta move through the southeast.

The Category 2 storm made landfall Wednesday along the Louisiana coast. Zeta is the 27th named storm of the 2020 hurricane season, which is the second-most active Atlantic hurricane season on record.

Forecasters are called for strong southwest to west winds that will produce low water levels across the western portions of the Pamlico and Neuse rivers, according to the hazardous weather outlook from the National Weather Service Newport/Morehead City office.

“Overall impacts are expected to be mainly minor, with everybody experiencing strong winds Thursday with a threat for severe thunderstorms Thursday night. Due to strong southwest winds we will have some minor coastal flooding issues on the sounds,” Erik Heden, NWS Newport/Morehead City’s warning coordination meteorologist, wrote in an update Wednesday evening.

Maximum wind gusts in Beaufort County range from 29 mph in Belhaven to 38 mph in Aurora. Power outages caused by fallen limbs are possible, the update reads.

With the remnants of Zeta is a cold front that will temperatures drop to around 44 degrees on Friday night.