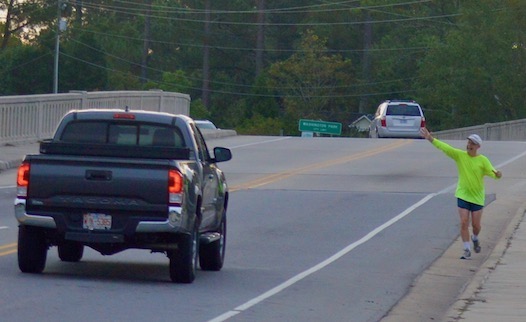 To say Mickey Burden likes to run would be a huge understatement.
The Washington resident who turns 71 in a couple of weeks is a familiar sight to local motorists most mornings along River Road. He’s hard to miss in his neon yellow, green or orange shirt —depending on the day.
Burden raises quite the ruckus along his usual route as he greets drivers with a big smile and a huge wave as they pass on both sides of the road. Most folks honk their horns, smile and wave in return, perhaps comforted that their day is off to a good start thanks to the fleeting connection.
“Running makes me happy and hopefully I help others feel the same way,” Burden said. “I feel good when I run, and life is more pleasurable when you smile. If I can brighten somebody’s day with a smile and wave, that’s a good thing, right?”
The happy runner grew up in Frankfort, Michigan and started running in 1966 when he tried out for the high school track team as a freshman. He hasn’t stopped since. The 5-foot, 3-inch, 130-pound Burden ran during his time in the Navy (he joined right out of high school), through 30 years with PSC-Texas Gulf, now Nutrien, and he’s still going 11 years into his retirement.
“My high school coach took one look at me and decided I was a distance runner,” Burden said. “I went out for the team just to hang out with my friends and have something to do after school. Little did I know.”
He started his military service at Camp Lejeune near Jacksonville. He met a girl from Washington, who introduced him to her sister in 1973. Two years later, Burden and the former Ellen Hudson were married. He was stationed on a submarine base in Groton, Connecticut, but there was no doubt where the couple would settle once his hitch was up.
“My wife was a hometown girl all the way, and that was fine with me,” Burden said. “I found a job in the fertilizer department with Texas Gulf in 1980 and retired as soon as my 30 years were up at the end of 2009.”
Burden ran different routes over the years, including Oakdale Cemetery and the Smallwood subdivision before starting on River Road almost eight years ago. He runs five days a week, with breaks on Monday and Friday to play golf. The time of day varies depending on the season, but it’s usually between eight and nine a.m., sometimes earlier to beat the summer heat. He starts near his house on FifthStreet, heads east across the Washington Park bridge, travels up River Road to Asbury Church Road, then turns around. Three miles up, three miles back, always against the traffic and always clad in neon. Most days it takes an hour and 10 minutes to finish.
“It used to be an hour, but 12-or 13-minute miles is pretty good for my age,” he said. “I want to make sure the drivers see me because I don’t bounce well.A close call with a guy backing his truck out of his driveway a year ago is the closest to disaster Burden has come.
“I thought I was going to be a statistic, but I ended up just getting bumped a little bit,” he said. “I still wave at the guy and he waves back.
”Burden plans on continuing his routine for another two or three years. He doesn’t take any medication and all his checkups have been fine.“I think running all these years has a lot to do with that,” he said. “I’ve always enjoyed it and it helps clear my head. Sometimes the conversations I have with myself even make sense.”