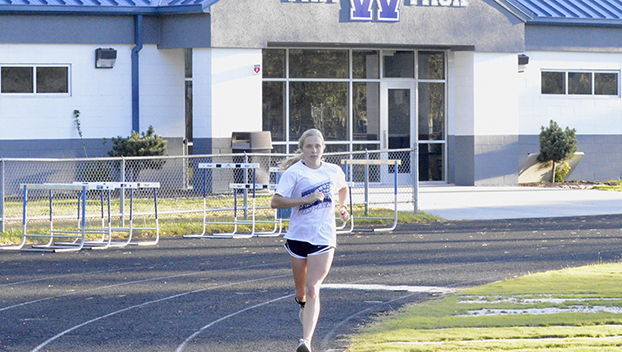 AIMING FOR A 3-PEAT: Senior Mary Emma Holscher (above) trains to help the Pam Pack girls win their third-straight conference cross country championship. Junior Aspen Sommers (below) rounds the track at practice this week. Though the cross country team may be smaller this year, and the fact is making its members more competitive. (Steve Barnes/Daily News)

First day of practice, same old routine. The public high school cross country season officially started Wednesday as off-season conditioning workouts morphed into practice—with another conditioning workout.
The difference is more mental than physical, as preparations begin for the first meet less than two weeks away.The Washington High School Pam Pack has 14 runners competing this fall, fewer than usual, according to coach Dawn Landen, who begins her third year as head coach after seven years as the assistant.
“Most of the freshmen and sophomores are not driving yet, so that makes it tough when they are physically at school only two days a week,” Landen said. “Our numbers are down, but the seven boys and seven girls on each team have been out here every practice, trying to improve. Our two teams are closer together and are in it for each other, so that’s been a positive to the COVID situation.”
In a normal fall sports season, cross country teams would be preparing for the post-season. That won’t happen until the holiday season this year, with conference and regional meets leading up to the state meet on Jan.8. The season is also much more condensed as teams try to pack 10 meets into five weeks before the post-season starts.The Pam Pack girls are training for their third-straight Eastern Carolina 2A Conference title. It’s among the most successful runs at Washington High School since Landen was part of back-to-back state championship squads in the late ’80s. Seniors Heba Alsudani, Stella Frisbie and Chandler Woolard were part of both winning teams, while classmate Mary Emma Holscher ran as a sophomore, but was on the tennis team last fall. She can be a part ofboth teams this year, thanks to COVID.
“We’re all just happy to have a season and get to see our friends,” Woolard said.
“All of us have to pull our weight since we are a smaller team,” Holscher added. “We run together in a group, which makes us faster and will help us score better at meets.”
“We’ve put in the hard work at practice to get ready, so we definitely want to go out as champions for the third-straight year,” Frisbie said.
Juniors Olivia Pastz and Aspen Sommers have also been part of the title run, while freshman Hailey Broadwell is the only newcomer. The Pam Pack boys improved immediately after Ethan Sommers transferred from Southside for his senior year. Sommers went to Washington Montessori Public Charter School his freshman and sophomore years, then finished sixth in the 1A state meet for the Seahawks as he covered the 5K course in Kernersville in just over 17 minutes.
“I would like to run in college and need to find the best competition I can,” Sommers said. “I’ve pushed myself hard in training over the summer, and it’s been fun to help the other guys on the team stay motivated to get better.”
Fellow seniors Isaac Campbell, Braulton Dixon and Tristen Nixon along with juniors Jonathan Foreman and Jackson Wilder and sophomore Hayden Moore make up the boys squad. The Pam Pack jump right in at South Lenoir in the opening meet, which should go a long way toward deciding the conference pecking order.
“We’ve been out here since July, working two-to-four days, most weeks until this first practice, so we should be in good condition and ready to go,” Landen said. “South Lenoir is always our main competition on the girls side, so starting later in the year with cooler weather should help us. All of them are excited to get going.”
You Might Like

With the spring sports season cut short this year, the Down East Wood Ducks are opening up an opportunity for... read more