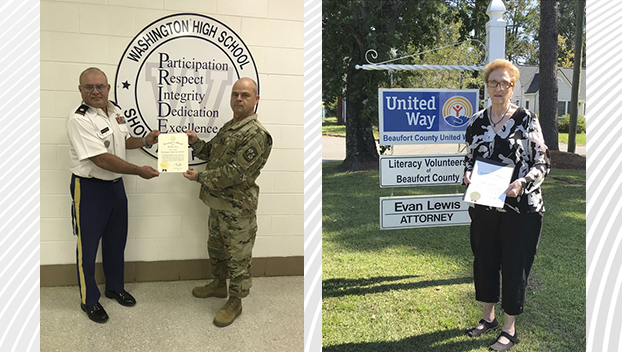 From Beaufort-Hyde Partnership for Children

The 2020 North Carolina Governor’s Volunteer Service Awards were recently presented to the top volunteers in the county.

The North Carolina Governor’s Volunteer Service Awards honor citizens who have shown concern and compassion for their neighbors by making a significant contribution to their community through volunteer service. The award was created by the Office of the Governor in 1979.

Any person, group or entity from the public, nonprofit and private sector may be nominated for an award to their county award coordinator. County award coordinators submit their top 10 volunteer nominations per county.  County recommendations are reviewed by the Commission and awards are given out in the counties.

The Governor’s Medallion Award for Volunteer Service was implemented in 2006 to recognize the top 20-25 volunteers in the state. Medallion recipients are nominated at the county level by the county award coordinator. Only one Medallion nomination is permitted per county. A statewide panel reviews and evaluates all these nominations to determine the award recipients.

Nomination forms for 2021 will be available soon at www.nc.gov/agencies/volunteer/volunteer-awards. Nominations are usually due in January.