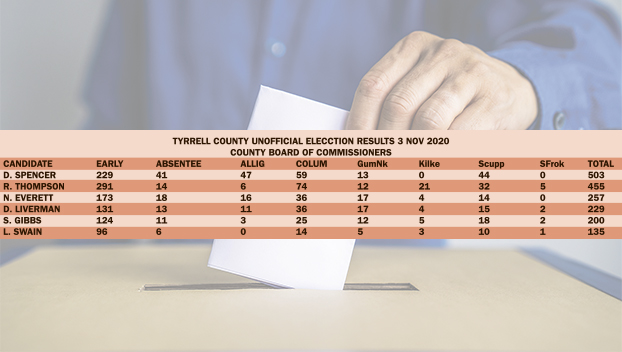 Above are unofficial results of precinct voting in the six-candidate race for three seats on the Tyrrell County Board of Commissioners in the Nov. 3 election. Dorothy Spencer, Robert Thompson, and Tommy Everett were elected. (R. McClees graphic)

In an unprecedented shift for Tyrrell County, a majority of voters chose Republican candidates in every federal and state contest in the Nov. 3 general election, unofficial results show.

At the county level, voters elected two newcomers to the board of commissioners: Democrat Dorothy Spencer and Republican Robert Thompson. They also returned incumbent Democrat Tommy Everett. All terms are four years.

Spencer polled 503 votes, Thompson got 455, and Everett garnered 257 to fill the three seats having terms that expire Dec. 1. Others who ran were Democrat Darryl Liverman (229), Republican Seth Gibbs (200), and unaffiliated incumbent Lawrence Swain (135).

Liverman’s total is close enough behind that polled by Everett that he has the option to call for a recount, and his request must be filed by Nov. 12, said Emily Hodges, elections director.

Although three commissioner seats were at risk,  and state law gives electors one vote for each seat, Tyrrell electors were limited to one vote among the six candidates in obedience to a 1994 federal court order that settled a civil rights lawsuit against the county.

Incumbents Nina Griswell (D) and Jordan Davis (R) are midway through their four-year terms, and were not subject to this election. Thus, the new board of commissioners will be composed of three Democrats and two Republicans, three men and two women, three whites and two blacks. For the first time in memory, no armed forces veteran will occupy a commissioner seat.

Donald Trump garnered 1,043 votes to Joe Biden’s 757 for president of the United States. Four other candidates polled a total of 15 votes among them.

In the race for state commissioner of labor, Tyrrell voters gave 958 votes to Republican Josh Dobson and 779 to Democrat Jessica Holmes.

Republican Paul Newby got 965 votes for chief justice of the state supreme court versus 788 votes for Democrat Cheri Beasley.

For seat 5 on the state court of appeals, Republican Fred Gore received 955 vote to 750 for Democrat Lora Christine Cubbage.

For seat 6 on the state court of appeals, Republican Chris Dillon overcame Democrat Gray Styers 979 to 724.

For seat 7 on the state court of appeals, Republican Jeff Carpenter outpolled Democrat Reuben Young 959 to 740.

For seat 13 on the state court of appeals, Republican Jefferson Griffin captured 960 votes to 740 for Democrat Christ Brook.

Democrats Chris McLendon and Keith Mason were unopposed for seats 3 and 4 as district court judges. They received 1,209 and 1,148 votes respectively.

Wesley Hopkins was unopposed for a seat on the nonpartisan Tyrrell soil and water conservation district board of supervisors. He polled 1,480 votes to lead the local ticket. There were 29 write-in for the office.

Emily Hodges, elections director, reported that 1,823 electors marked ballots in the current election for a turnout rate of 76.89% of the 2,371 registered voters in Tyrrell County.

Hodges also reported 12 provisional ballots were cast in Tyrrell County, too few to affect the outcome of any race on the ticket.

Provisional ballots cast on Election Day must still be researched to determine voter eligibility, the state board of elections stated. Provisional ballots are cast when an individual’s name does not appear on the poll book or other questions arise about that person’s eligibility to vote. After Election Day, each county board of elections meets, before certifying the results, to make decisions on provisional applications submitted by voters.  That meeting could be as late as Nov. 13.