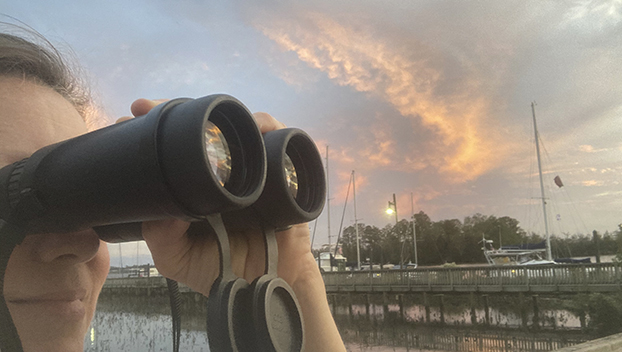 The south side of the county is replete with wintering birds between November and early spring. Last week, a yellow-headed blackbird was seen in a flock of more than 400 red-winged blackbirds on Bay City Road, south of Aurora, on Nov. 5. This is a western and Great Plains species that sometimes shows up in eastern flocks of blackbirds, cowbirds or starlings. Check flocks of winter blackbirds for a large one with a brilliant-yellow head or face.

Different species of ducks are arriving and being observed on the south side of the Pamlico River, particularly in creeks and wetlands near the phosphate mine. Northern shovelers, gadwall, green-winged teal, hooded mergansers and ruddy ducks have been reported this past week in various southside creeks and waterways.

For backyard and casual birders, the coming months offer an opportunity to branch out and observe various wild duck species in our local waters. Early morning and evening are the best times to look. The following is a list of some good places to see them throughout the late fall and winter.

Ruddy ducks, bufflehead and scaup can be seen from time to time on the Pamlico from the pier at Havens Gardens Park. Also try the swimming beach area and various waterside trails at Goose Creek State Park, as well as Bonner Point in Bath, and sometimes the Washington downtown riverwalk.

Even the mouth of Jack’s Creek by the “fishing park” at East Main Street — usually full of domestic farmyard ducks — has been known to sport a couple of Northern shovelers, wood ducks (!), and a Ross’s Goose (!!!) in the last two years.

On the south side, the public boat ramp in Aurora can be a good place to sight ducks, as well as many other water birds and birds of prey. The ferry connecting the north and south sides of Beaufort County, from Bayview to Aurora, provides a place to observe winter ducks. Hundreds of surf scoters and black scoters, a few common loons and dozens of American white pelicans were observed from the ferry in the last week.